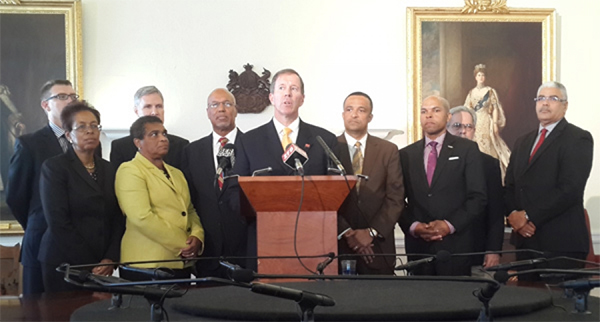 Hamilton, Bermuda — Premier Michael Dunkley and members of his Cabinet held a press conference on Tuesday afternoon to respond to the mass public protest rallies on Monday and Tuesday organised by the Bermuda Trade Union Congress (BTUC).

Dunkley said he is willing to meet with the BTUC, but “furlough days” will remain on the table.

He said, “We’ve communicated to the union when they came yesterday at the first rally, that they asked us to rescind the furlough days. We said that was not possible. All options must be on the table.”

He added, “We have more proposals to put to the union that we think can offer significant savings. However none of these decisions are easy. They all are very difficult to make. We’re willing to work through those with the BTUC, if they are willing to come back to the table.”

He added, “We had a discussion a few weeks ago, when I announced the job figures, we talked about the number of people unemployed. It’s 3,000-and something. All of those jobs are private sector jobs. There is not one person that is unemployed in this island that it’s because the government laid them off. And the reason that we didn’t lay them off? The reason that we found a way not to lay them off was because of this furlough.”

The finance minister continued: “The furlough has saved a lot of public sector jobs, and that’s the one thing that they’re objecting to. The financial situation that caused us to put the furlough in hasn’t changed significantly. It’s improved somewhat, but we’re still in the hole. We just have to face reality. So it’s ironic, wouldn’t you say, that the one thing that has saved their jobs, people find most objectionable.”

Dunkley said that Monday’s planned meeting with the union was cancelled because an emergency meeting at Cabinet hadn’t finished until 8pm.

He said, “We went away and agreed to come back and have another meeting. I spoke to the president earlier today after trying to get him a few times last night to apologise for not being able to get the team over to the meeting. And why did that happen?

“Because when we sent people over to discuss and negotiate, we wanted to make sure that they walked into the room and that there were proposals on the table if were agreed to that Cabinet had already agreed to. We weren’t in a position to do that.

“We called an emergency Cabinet meeting at 4 o’clock yesterday afternoon and we met until after 8 o’clock last night.”

He added, “For all of those people that are upset with the terms that we have of putting all the options on the table, I understand where you’re coming from. I am not willing to jeopardise the future of current Bermudians and future Bermudians for decisions that we are making today.”

“The authorization for us to spend money and to tax money runs out on March 31st. Without another legal authorization from Parliament, the Government cannot function. That is the letter that I sent to them.

“There was no threat. It’s the reality, it’s law. Every dollar of government money requires a legal authorization and the current authorization that we have runs out on March 31st.

“That’s why we go up to Parliament we analyse government’s budget, the future, what our plans are and all that stuff. Because he law requires us to do it.

“If somebody wants to interpret the letter that I sent as in some way threatening, they don’t understand the system. The system is that we are a country with laws. I’m the finance minister but I am controlled by the law and the Constitution. The Constitution and the law of this country requires that people’s Parliament approves spending.

“It’s not approved yet and but I can tell you one thing, it’ll happen. But for the 20th, we’re working on it and we’re moving forward on that. But the thing that I was trying to communicate to the unions was that irrespective of whether people march, whether they make speeches or whatever, the law is the law, we cannot spend any money without legal authorization.”

In the meantime, all public schools were to be closed on Wednesday, in anticipation of further industrial action.

Additionally, the public transportation system will not be in operation.