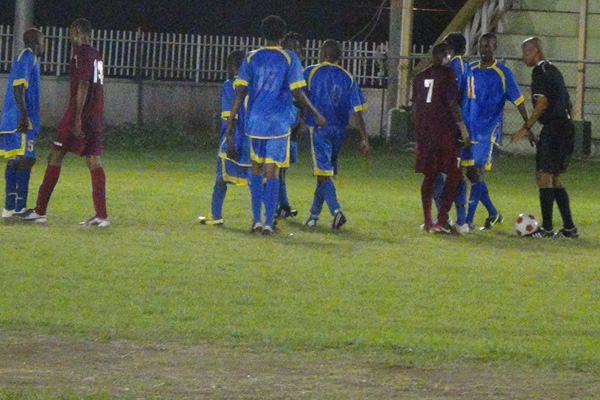 (Sports) The fast paced action continued in the Nevis Football Association league at the ET Willet Park on the evening of Saturday 9th November.

In game one, the Brand Slybo Stoney Grove Strikers team was indeed in STRIKING mood as they struck the back of the net no fewer than ten times versus the Hard times team.

The Hard times team really had a HARD TIME keeping up with the momentum established by the Stoney Grove men but managed a consolation goal by the end of the virtual massacre.

Match two however had the members of the crowd viewing with undivided attention as Beyond Home All stars engaged the more highly touted Brantley Bronx United team.

The Bronx men played their usual aggressive style but the All stars team was its usual determined and calculated self and by the final whistle, to the chagrin of the Brown Hill supporters, the score line was 2 goals to 1 in favour of the All stars men.

There was one match scheduled for Sunday 10th November and that match had to be aborted due to the sudden and unexpected failure of the flood lights at the ET Willet Park. At the time of the incident, the Villa Int team was leading their rivals Stones United by a score line of 1 goal to nil.

An official from the Nevis Football Association has indicated that the match will be rescheduled.

Here is a detailed summary of the matches played over the weekend:

This should be a keenly contested game.