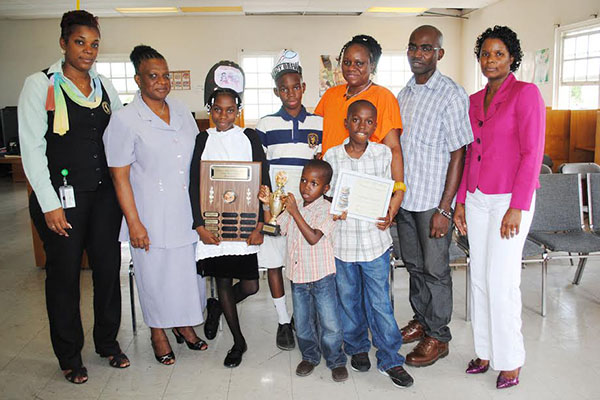 A newcomer to the reading programme nine-year old Hadassah Walters of the Tucker Clarke Primary School, competing in the junior category, emerged as the overall winner after reading a mindboggling 37 books in five days, sometimes reading as many as nine books a day.

“Hadassah exceeded the limit,” observed Mrs Browne. “We gave her five books per day, and she read even more than five books, and she was the overall winner for the programme. We have never had anyone read as many books. Actually the last winner that we had she read 32 books.”

Hadassah’s secret was revealed by her mother, Mrs Alicia Walters, who said that her family has a relationship with God and that they read the Bible a lot.

For her feat, Hadassah won the trophy for the junior category and her name was engraved on a plaque for being the overall winner. She also got a Samsung Galaxy Tablet from LIME, a gift certificate from TDC, while the FirstCaribbean International Bank opened an account for her.

Hadassah’s brother, 12-year old Ginosko who is a student of the Basseterre High School had also entered as a first timer but in the senior category. He managed to read only eight books and asked why he was beaten by his younger sister, his father came to his defence.

“He is inspired by different things,” explained Mr Rohan Walters. “He loves to read – he reads a lot and he is most inspired but he puts his effort into sport. He loves football, cricket, and track and field. He is an all-rounded individual.”

The Walters family will be back next year and while Ginosko will not be eligible to enter, eight-year old Joash who was time barred this year as his father registered him late, will be entering the competition.  Another of the Walters siblings, four-year old Sharma who was present at the awards giving ceremony has some three years before he could enter.

“The objective of the Read-A-Thon is to get avid readers from the age of 7 to 12 develop a good habit of reading and to develop reading for pleasure,” explained Mrs Browne. “This helps them to increase their intellectual capacity and increase knowledge in different subject areas.”

“Maria Webster who just turned seven broke all records by being the youngest child we have ever had in the programme and one who read 28 books,” said the Assistant Librarian.  “She is very fluent in her reading and she expresses herself quite well. It is her parents who encourage her to read. She goes to Sky Academy.”

The final record was the fact that for the first time the library was able to give gifts to all the participants due to the generous contribution of the Development Bank of St. Kitts and Nevis which was represented by Support Officer in the Marketing Department, Mrs Vernitha Maynard.

Keynote Speaker, and a former winner of the Library Read-A-Thon, Mr Akeem Bacchus who is a Mathematics teacher at the Basseterre High School told the participants that if they cultivate the habit of reading in themselves, a book will dependably find its way into their hands.

“Nothing is repackaged for you, nothing is pre-thought or pre-digested for your sake,” advised Mr Bacchus. “When you are reading a book it is your imagination that formulates the entire story, therefore the more you read, the better your imagination gets at producing these stories, even when they haven’t been written as yet.”

Stepping in as a replacement for the Minister of Education the Hon Nigel Carty was Mrs Eleanor Phillip, Coordinator for Learning Support in the Ministry of Education who told the participants that reading is a spark which ignites the imagination and curiosity of a child.

“We are very grateful to the staff and other members of the library who initiated this Read-A-Thon,” said Mrs Eleanor Phillip. “We are always very grateful to institutions such as these that foster reading among our students. We indeed congratulate you and the parents for encouraging the students to read.”