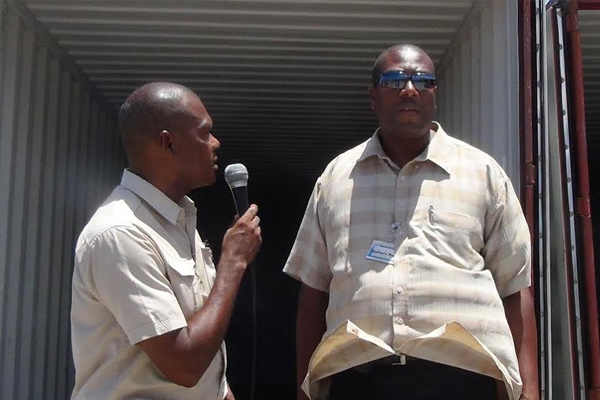 Sports Page— There was a hub of activity at the Long Point Port on Wednesday 16th July and many of the individuals, who were conducting business on that day, took time out to witness first hand, the return of several Drag Racing vehicles from Grenada.

Mervyn Bonnet, the man in charge of the local Drag Racing Unit, explained that some 8 vehicles recently represented Nevis in a Drag racing event in Grenada. Six of the vehicles actually belong to Nevis and additionally there were two vehicles from Antigua as part of the team, as they are actually based on the island.

Bonnet indicated that the Nevis racers and their cars turned quite a few heads in Grenada. As a matter of fact, only Team Nevis cars made it into the major race of the event—the 8 seconds category.

Here it was a show down between the now famous KING OF CALLE owned by Gavin MOON Clarke and the upcoming BIG SEXY driven by Kareem Walters.

BIG SEXY created a brand new record for Grenada Drag Racing when it ran the fastest time ever in their Drag Racing history which incidentally commenced in 2002—a whopping 8.56 seconds.

This left KING OF CALLE trailing in its smoke in second place at 8.7.

Kareem Walters noted that the Drag strip in Grenada is extremely long—a quarter mile and stated that at first he was a little ‘shaky’ but noted that after a while he started to enjoy it.

Gavin Clarke for his part, admitted that the better car won on the day but indicated that KING OF CALLE will be rectifying that in the upcoming Culturama race meet.

Bonnet used the opportunity to advertise the Culturama race event which is set for July 27th. According to him, it will feature vehicles from St.Kitts and Nevis but will also feature vehicles from Anguilla; Antigua and St.Maarten which are stationed in Nevis. The St.Maarten Drag racers are also working on the possibility of sending a contingent of racers and vehicles but that is still to be confirmed.

However, there are some matters to be rectified, especially between KING OF CALLE and BIG SEXY and so the expected huge crowd will be in for a treat.