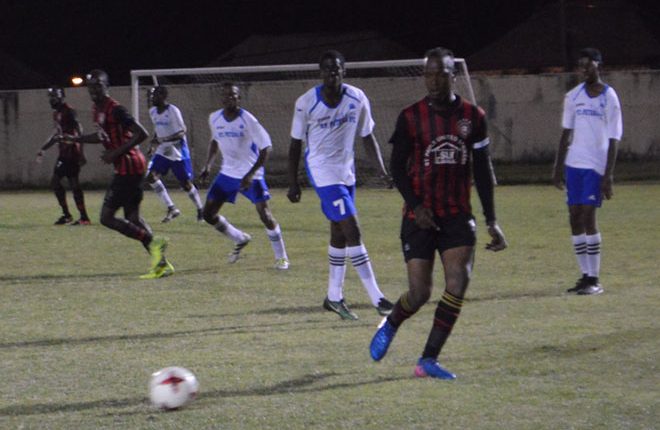 Winners Circle Newtown United, Fast Cash Saddlers United and Rams Village Superstars were the big winners of Match Day 4 in the National Bank Premier League this past weekend at the Warner Park. Winners Circle Newtown United trounced St. Thomas/Trinity United 6-0. Scoring for Newtown Yohannes Mitcham from the penalty spot in the 12th minute, Akimba Lawrence scoring twice in the 40th and 90th minute, Tijaun Isaac in the 56th min, Aunjunel Esdaille in the 82nd min and Yusuf Saunders in the 89th min.

On Saturday, Fast Cash Saddlers United stunned former champions Sol IAS Conaree F.C. 1-0. Niquan Phipps scored the lone goal in the 30th minute handing Conaree their first defeat of the season. Meanwhile, S.L. Horsford St. Pauls United snatched a draw from the jaws of victory after ceding a 1-0 advantage over Elco Ltd. St. Peters with just a minute to go in the match. St. Pauls took the lead in the 30th minute when Keithroy Freeman found the back of the net and kept that lead for most of the match. But with three minutes stoppage time added on, Kirkland Harris spoiled the party for St. Pauls in the 92nd minute to equalize.

Only one minute of stoppage time was left after that, which meant St. Pauls were only a minute away from adding three more points to their league tally. That last gasp equalizer also meant St. Peters got their first point of the season, having lost their previous encounters. Coach Shakespeare Southwell praised his players for their resilience in coming from behind to earn a draw. “Gotto really give thanks for our resilience tonight…we almost didn’t get nothing out of it but at the end we managed to pull out something and we give thanks for that,” Southwell said. He hopes this will be the turning point in the season for his team.

Obviously Coach Huggins was disappointed with giving up the one goal advantage so late in the game. “The game, in my estimation was not one of our best games, nevertheless we have the three points but gave it up in the end. We just have to get back to the drawing board and get our act together,” Coach Huggins said.

The National Bank Premier League continues this Saturday with matches starting at 4pm all at the Warner Park.