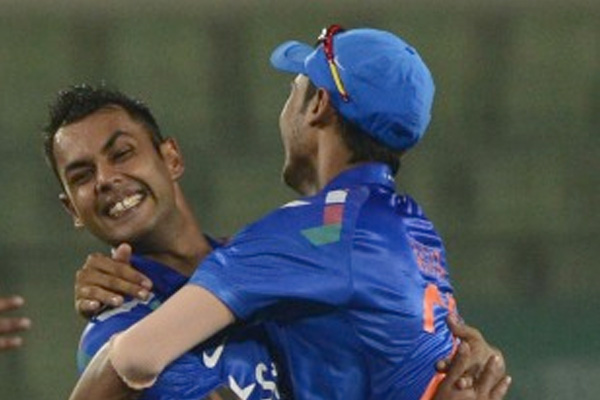 Sports Page — Who would be interested in a hastily-organised, meaningless bilateral ODI series taking place in the shadow of the football World Cup, that too with several of the game’s biggest stars being rested. Judging from the vast swathes of empty stands in the usually packed Mirpur stadium, and the struggles to get a television broadcaster in India, not many. Those who did tune in today though caught one of those gobsmacking, prediction-defying results that make sport captivating to watch.

Two days ago, Bangladesh posted 272 in Mirpur and their captain had felt that had not been sufficient. Today, at the same ground, India were knocked over for 105, but that not only proved sufficient, it was 47 too many for Bangladesh. Pacy teenage debutant Taskin Ahmed was the star of the first half of the game, with a five-for that kept India to their lowest total against Bangladesh, but that faded into insignificance as Stuart Binny conjured figures of 6 for 4 to extend the home side’s losing streak to nine.

On a track with plenty of juice, spiced up further by a rain burst that interrupted play for two-and-a-half hours, the quicks thoroughly enjoyed themselves. This is not a stadium which is usually favourable to them, but today the pitch was as helpful as an early-summer Headingley surface, with spiteful deliveries being served up with alarming regularity

The batsmen found how testing the conditions would be on the first two balls of the game itself as Mashrafe Mortaza nearly had both India openers lbw, though the appeal against Robin Uthappa was turned down. It didn’t get any easier over the course of the game, and no batsman looked comfortable in the middle, though hardly any of them showed the necessary resolve to grind through their way through tough patches