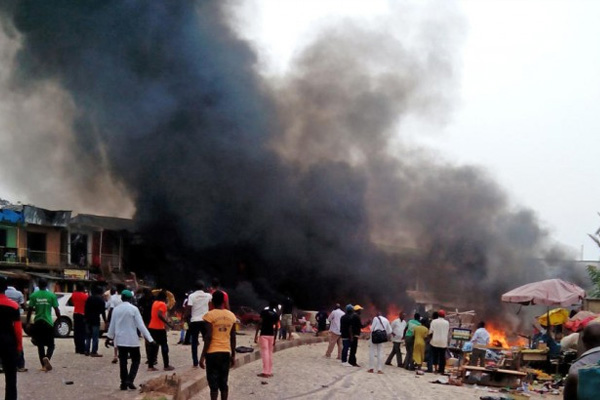 There are conflicting reports of the number of people affected by the blast. An updated number is expected later on.

A hospital source said Wednesday that 21 people were killed in the explosion and another 27 were injured. The source from Sani Abacha Specialist Hospital in Damaturu spoke on the condition of anonymity, because he was not authorized to speak to the media.

“All the victims are young men and boys. They sustained burns, ruptured tissues, shattered bones,” he said.

A police official placed the death toll lower Wednesday, saying 10 people had died. The hospital spokesman said its count was based on the number of bodies delivered to the facility’s morgue.

The incident occurred on the outskirts of Damaturu, in Yobe state, the sources said. The explosives had been concealed in an abandoned motorized rickshaw outside the center.

“Our men have deployed to the scene, but it’s too early for us to give details, said Yobe state police Commissioner Sanusi Ruf’ai.

Volatile northeastern Nigeria is the home of the Boko Haramgroup, the militant Islamists who abducted scores of schoolgirls in April.

A Yobe police official in Damaturu told CNN the extremist group had distributed leaflets to the viewing centers in three different languages warning them not to open during the World Cup.

Maina Ularamu, a local official in Madagali, in Adamawa state, also confirmed to CNN that people in the town — which has been the target of previous Boko Haram attacks — had been warned against watching the soccer matches.

“Letters have been distributed to viewing centers in Adamawa state warning people not to gather to watch the World Cup games,” she said. “We suspect these letters to be from Boko Haram. People are very afraid and are not leaving their homes.”

According to a police official, “This is Boko Haram’s area of operations.”

To try to combat the growing threat from the militants, the Nigerian government placed Yobe, Borno and Adamawa states under a state of emergency last year.