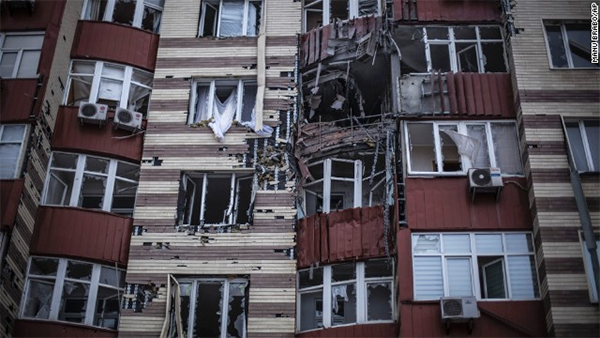 Bodies in streets as shelling rocks Ukraine city of Donetsk

Donetsk, Ukraine (CNN) — Twelve people have been killed Friday in shelling in the eastern Ukraine city of Donetsk, an official with the pro-separatist City Council said, as the conflict between the Ukrainian military and pro-Russian separatists escalated in the past week.

CNN could not confirm the 12 deaths, but its team in Donetsk saw seven bodies after a series of shell blasts near the center of the city.

Five of the bodies, concealed under sheets, could be seen at a spot by the Hotel Europe, where a local billionaire has organized food aid handouts by his staff. A shell apparently hit near where people were waiting in line.

Elsewhere, two more bodies could be seen where a bus was hit.

Until now the fighting has largely been concentrated on the outskirts of the city near the airport.

But Friday the blasts moved significantly closer to the city center.

It’s not clear who is responsible for the shelling. In previous instances, each side has blamed the other.

What is clear is the mounting civilian death toll, with the ordinary residents of Donetsk being caught up in the fighting.

On Saturday, at least 30 civilians were killed in shelling in the southeastern city of Mariupol, while eight people died when a transit stop in Donetsk was shelled two days earlier.

The government in Kiev and its Western allies accuse Russia of fueling the violence by sending troops and military equipment over the border into Ukraine. Moscow denies the allegation, although it has said some Russian soldiers are fighting in Ukraine as volunteers.

Russia is following a “disturbing pattern,” he said, “using military force to annex Crimea, destabilize eastern Ukraine and intimidate its neighbors” in disregard of international law.

On Thursday, the European Union Foreign Affairs Council announced it was extending the financial sanctions imposed against Russian and Ukrainian separatist interests until September in response to the mounting violence.

EU foreign policy chief Federica Mogherini said she was pleased the European Union was maintaining a united front on the issue.

“We hope this can help put pressure, in particular on Russia, to take positive steps and prevent negative steps to you’ve seen in recent days,” she said.

In a statement, the council strongly condemned “the indiscriminate shelling of the residential areas, especially in Mariupol and the recent escalation of fighting in the Donetsk and Luhansk regions of Ukraine.”

It said it was shocked by the high number of casualties, adding: “It notes evidence of continued and growing support given to the separatists by Russia, which underlines Russia’s responsibility.”

Ukrainian President Petro Poroshenko announced Monday that Kiev would ask the Hague tribunal to investigate alleged “crimes against humanity” in the conflict in eastern Ukraine.

The conflict broke out last spring after Russia annexed Ukraine’s southeastern Crimea region and as pro-Russia separatists claimed control of the Luhansk and Donetsk regions. A ceasefire agreed to in Minsk, Belarus, crumbled long ago.

From mid-April to January 21, the conflict killed at least 5,086 people and injured at least 10,948 others, according to the United Nations.