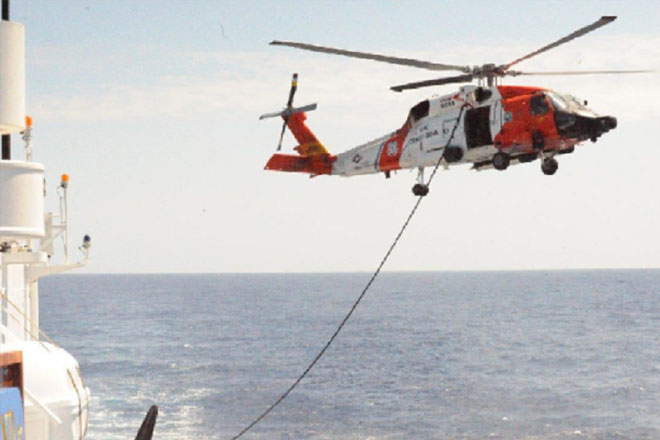 FLORIDA, United States — A body in a survival suit was amidst the debris found in the search for container ship El Faro and authorities say they believe the vessel sank as it was battered by Hurricane Joaquin battered in Bahamian waters late last week.

The United States Coast Guard (USCG) has confirmed the discovery of the body in a survival suit. There were other suits in the debris area but they were all empty.

“In one of the survival suits we did identify human remains. We lowered a rescue swimmer to confirm that the person was deceased and they were basically unidentifiable,” Captain Mark Fedor said at a press conference this morning.

“We needed to move from there quickly because there were other reports of survival suits, life rafts and life boats. We checked those methodically and there were no other signs of life.”

Fedor said one of the two lifeboats from El Faro was found but no sign of any of the other 32 people who were on board the 735-foot cargo ship when it lost propulsion and began taking on water on Thursday morning, off Crooked Island in the Bahamas.

The ship, which had 28 American and five Polish crew, was heading to San Juan, Puerto Rico after leaving Jacksonville, Florida on September 29 when Joaquin was still a tropical storm.

Fedor said finding the missing boat is no longer a priority.

“We are still looking for survivors or any signs of life. We’re not looking for the vessel any longer,” he said.

The National Transportation Safety Board and the Coast Guard will launch an investigation into why the ship ventured toward the hurricane and how it sank.

A 225-mile debris field was discovered yesterday as the USCG continued a search that has covered more than 70,000 square nautical miles. Styrofoam, wood, cargo, containers, life jackets, life rings, and an oil sheen were among the debris.

A life ring with El Faro markings was the first sign of the ship found since it disappeared. It was discovered on Saturday about 120 miles northeast of Crooked Island – approximately 70 miles from El Faro’s last known position.