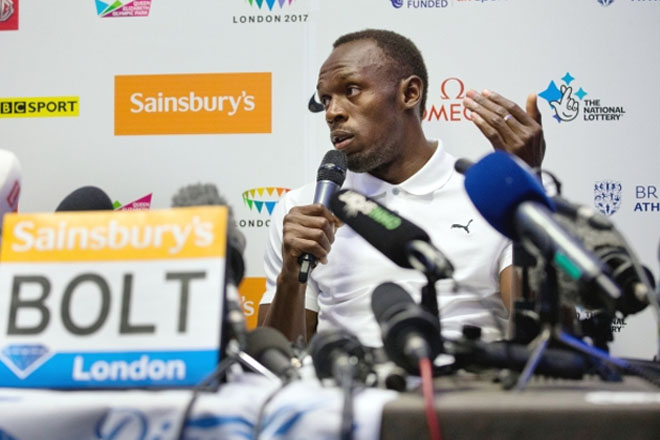 Bolt ‘will show up’ at World Championships in Beijing

London, England (AP) — Even though Usain Bolt is still waiting to see if he has fully recovered from a left leg injury, the Olympic champion is sure he will be able to compete at next month’s World Championships in Beijing.

Bolt withdrew from Diamond League meets in Lausanne in June and Paris this month because of his injury, but the Jamaican is scheduled to run in the 100 metres today in London at the Olympic Stadium.

“I won’t know until tomorrow,” Bolt said yesterday about his fitness level. “We have been training good, I have been really working hard. It is all about getting the right execution.

“When the championship comes, if anyone knows anything about me, I will show up.”

The 28-year-old Bolt has not competed since running the 200 in New York last month, but he said being in Beijing is his goal and he will depend on coach Glen Mills to get him there.

“I’m never worried because he always finds a way to get me ready for championships,” Bolt said. “All we have to do is just work. I need to work on my start. I think the last part of my race, it always comes together. This is what we have been focusing on.”

Bolt won the 100 and 200 at the 2008 Olympics in Beijing, both in record times. A year later, he broke both those records at the World Championships in Berlin.

Bolt’s main competitor in Beijing this year will be Justin Gatlin, a 33-year-old American who won the 100-metre gold medal at the 2004 Athens Olympics and has twice been banned for doping.

Gatlin ran a personal best 9.74 seconds in May and is considered a favourite for the 100-metre world title on August 23.

Bolt has yet to run under 10 seconds this year and was asked if it would be bad for the sport if he was beaten by Gatlin and lost his world record.

“I’m not planning to lose so I can’t answer that question,” Bolt said. “I never worry about one person. For me, I’m not worried about times. Sometimes it takes getting to the big moment to get focused and get ready. I’m sure when I get to the championships it will be a good run. As long as I am in great shape, it will be no worries.”

Bolt said Mills could make him compete in more events before Beijing, depending on how he fares in London today.

“He will see what happens tomorrow and it will determine if I need more meets,” Bolt said. “It (victory in London) will definitely give me momentum and confidence going into the championship.”