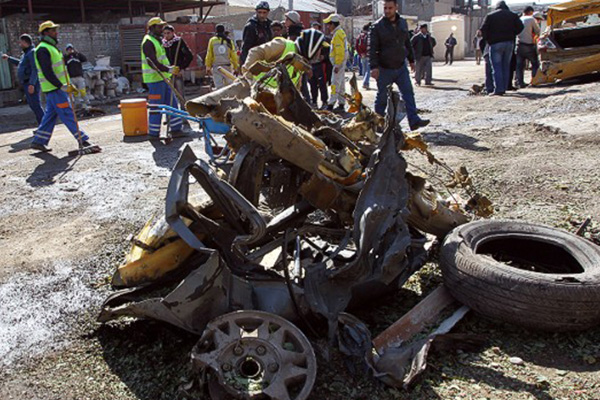 (CNN) — At least six people were killed in bombings across the Iraqi capital, Baghdad, on Thursday, police said.

Four car bombs and two roadside devices exploded in five different areas around the city. Almost all of the neighborhoods were largely Shiite. At least 21 other people were wounded, police said.

The blasts came one day after deadly attacks across the country that killed 47 people and wounded more than 120 others.

Political and sectarian violence has raged in the past year.

There has been constant tension between Sunnis and Shiites. Many Sunnis in Iraq have felt marginalized by the largely Shiite government. The Shiites have emerged politically in the country since Iraqi leader Saddam Hussein was overthrown in 2003.

It isn’t yet known who is responsible for the Thursday violence.

The United Nations said 2013 was the deadliest year in Iraq since 2008, with almost 8,000 people killed, most of them civilians. The figures remained grim in January. According to the U.N. mission in Iraq, more than 600 civilians and more than 100 members of the country’s security forces have been killed. The U.N. tally does not include those killed in a fresh wave of violence in Iraq’s Anbar province, west of Baghdad, where al Qaeda-backed militants and Iraqi security forces have been fighting since the end of last year.

U.N.officials estimates that as many as 45,000 families have been displaced in Anbar.

“The U.N. continues to provide aid to those affected by the fighting in Anbar, despite the challenges posed by the deteriorating security environment and ongoing operations in the province,” said Nickolay Mladenov, U.N. point man in Iraq.

The ongoing violence in the Sunni provinces of Anbar, Salaheddin and Nineveh has raised concerns among some observers that parliamentary elections scheduled for April 30 will be delayed.

“The U.N. continues to hold discussions with senior political figures in an attempt to assist in paving the ground for a political solution to the crisis, calling on all to show national unity and address the root causes of violence in Iraq,” Mladenov said.

Human Rights Watch, the human rights watchdog group, issued a report Thursday on the detention of thousands of Iraqi women subject to torture and “ill-treatment, including the threat of sexual abuse.” The group cited the country’s “weak judiciary” and substandard trial proceedings as causes of the problem.