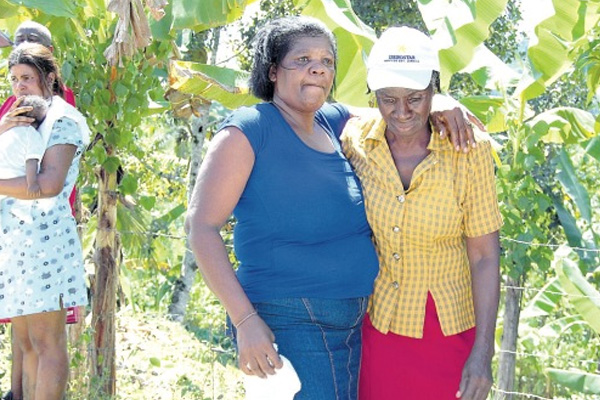 PLANTATION HEIGHTS, St James — Screams disturbed this normally quiet farming community early yesterday morning after the blood-soaked body of a nine-year-old boy was discovered in bushes with his hands and feet bound.

The murdered boy has been identified as Romaine Robinson, a grade three student at Bickersteth Primary School here in St James.

There were expressions of anger from the deeply hurt residents who had gathered in various sections of the community to discuss the cruel murder of the little boy.

“Mi caan come to it,” a female member of the community said, while another called for divine mercy. “Lord Jesus, have mercy, have mercy, God. Lord God, have mercy,” the woman said.

“Mi have mi grandpickney and it could be my grandpickney, [killed],” said another female member of the community.

Residents described Romaine as “a very helpful and willing youth who does not give trouble”.

Gwendolyn Todd-Foster, Romaine’s grandmother, said that occasionally her grandson, who is left in her care, would sleep at the home of an elderly man who lives close by.

She told the Jamaica Observer that when her grandson did not come home by 10:00 Wednesday night, she assumed he was staying at the elderly man’s house.

“Last night… me get up around after 10:00 and go look for him and never see him, so mi figure say a over the old man him deh, [so] me go back to bed. Mi never go over the old man because over deh dark,” said the grieving Todd-Foster.

“…So mi say this morning (yesterday) him would come over because when him normally sleep a di old man him come over early a morning time,” she said.

But Todd-Foster got the shock of her life when she was summoned early yesterday morning to nearby bushes where the gruesome discovery was made about 4:50 by a man who had gone to relieve himself.

“Mi nephew come knock me up and ask me weh Romaine deh. So mi say him over Nyah (the elderly man). He said Romaine dead. Romaine dead inna one bush over dere so,” the grandmother said in a faint voice. She said she went in the bushes where she saw the body of her grandson.

An image captured on a smartphone by a resident showed the corpse with hands and feet tied and a piece of clothing wrapped around the neck.

The boy’s uncle, Andrew Foster, struggled to come to grips with the brutal killing of his loved one, claiming that it was done by someone known to him. “Ah nuh nobody from far do it; ah somebody from the community do it,” Foster theorised.

He told the Observer that he last saw his nephew about 8:00 Wednesday evening at a shop playing with another little boy. “I leaving everything in God’s hand because one day the truth must [be] revealed. Somebody must confess [to the killing],” said the distraught uncle.

Commander of the St James Police Division Egbert Parkins, who was on the death scene early yesterday, vowed to bring the killer(s) to justice. He said a team, led by St James crime officer, Inspector Richard Hylton, assisted by the Major Investigation Taskforce, was spearheading the investigations. He said he could not divulge much information out of fear of compromising the case, but disclosed that the body had a stab wound.

“No human life should go like this; the life of a young boy, nine years old, has been snuffed out in a condition that no human should go,” said Senior Superintendent Parkins.