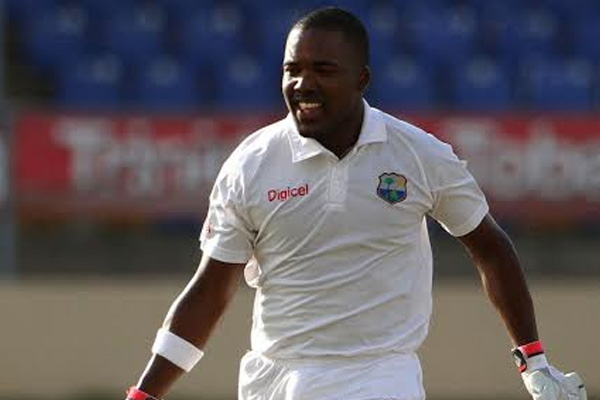 Sports Page — West Indies’ top order produced a commanding performance on an extended second day to take an 89-run lead in the Trinidad Test. Kraigg Brathwaite and Darren Bravo didn’t let the hour-long rain break affect their concentration and partnered to put up 182 for the fourth wicket to take the team well past New Zealand’s score. The bedrock of West Indies’ response was a composed Brathwaite, who went on to complete his maiden Test century, while Bravo, with his first Test hundred in the West Indies, was the driving force.

New Zealand’s bowlers strove but the Queen’s Park Oval pitch was at its best from a batting perspective. There was occasional lateral movement for the seamers and some inconsistent bounce for the spinners, but not to an extent to cause many alarms. It still required application from the batsmen, though.

Brathwaite had been guilty of not being able to carry on the last four times he had gone past fifty. Today, however, he concentrated hard, using the classical Test approach of grinding the opposition and went past his previous best of 68. Boundaries were not his preferred mode of scoring – five, four and four came in the three sessions – so it was fitting that a single in the 68th over took him to his century – the first by any batsman in Port-of-Spain in five years.

New Zealand tried to play on Brathwaite’s patience by sticking to a line outside off, inviting the drives. Brathwaite, though, stayed a step ahead and only pushed at the deliveries when either the length was too full or short enough. Only five of his 13 boundaries came through the off side, three of which were through gully.

Throughout the innings, he kept one end watertight, scoring consistently at a strike rate of around 50 – his half-century came off 100 balls and the hundred in 199 balls – but fell to a tired push back to Trent Boult towards the end of the day. He made 129 off 258 balls.

Bravo’s penchant for flashy strokes kept the bowlers interested. He was lured into tentative pokes by away-going deliveries from Boult and was drawn into false strokes against spin. But when the ball hit the middle, didn’t it look pretty? Bravo’s innings had started with a brace of on-drives against Ish Sodhi. Twice, Tim Southee was punched on the up through covers. Then a length delivery from Mark Craig was nonchalantly flayed over mid-off, landing just short of the boundary. These were manufactured shots, in line with Bravo’s flair.

As the bowlers tired out and New Zealand waited for the new ball, Bravo grew in comfort and unfurled the big shots. Sodhi, the legspinner, was lofted for sixes thrice in nine balls. In between, when Sodhi dropped it short, Bravo was quick to rock back and punch it through cover. He moved into the 90s with a crisp cover drive off Jimmy Neesham in the 71st over, then completed his sixth Test century in the next with a push through off.

Eighty-two runs came in 18 overs after tea. In the 19th – the last over before the new ball became available – Bravo attempted a big hit against the spin of Kane Williamson, but spliced it to long-off. Bravo was palpably disappointed on his dismissal at a crucial stage. West Indies lost Brathwaite nine overs later but Shivnarine Chanderpaul saw them through the tricky period.