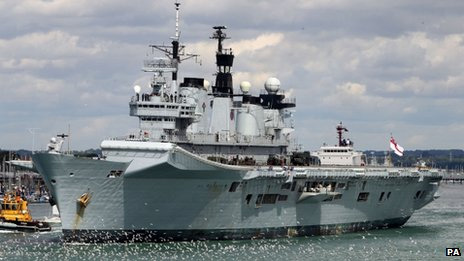 (BBC) The aircraft carrier HMS Illustrious will be sent to help people affected by the typhoon in the Philippines, Prime Minister David Cameron has said.

Speaking on a visit to India, Mr Cameron also said the UK government had now given more than £20m in aid.

Typhoon Haiyan, which hit on Friday, killed at least 2,300 people and displaced more than half a million.

HMS Illustrious is currently in the Gulf and is expected to arrive in the Philippines on 24 November.

The carrier will relieve destroyer HMS Daring, which is already on its way and should arrive on Friday.