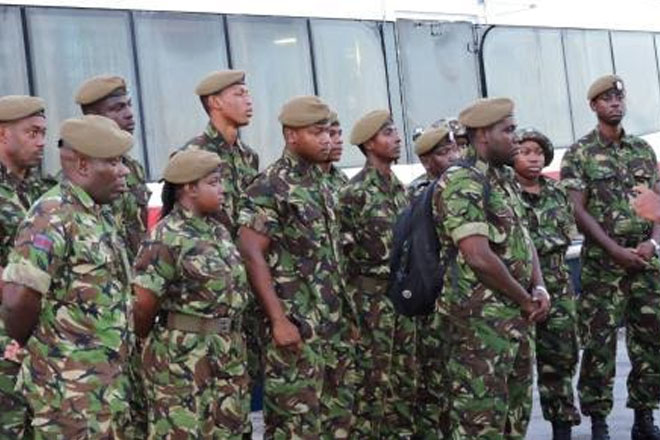 Brades, Montserrat — The British overseas territories of Montserrat and the British Virgin Islands have both mobilised support for Dominica following the passage of Tropical Storm Erika.

The government of Montserrat, with UK Department for International Development support, has decided to deploy a contingent from the Royal Montserrat Defence Force (RMDF) to Dominica to carry out disaster relief work and support Caribbean Disaster and Emergency Management Agency (CDEMA) in their work on that island.

Meanwhile, the government of the British Virgin Islands has joined the international community in a demonstration of solidarity for Dominica and has pledged US$100,000 towards relief efforts.

Second Lieutenant Glenroy Foster of the RMDF, himself a civil engineer, is leading the contingent of 13 persons. The contingent is comprised of both male and female and members who are skilled in various trades and in search and rescue having being refreshed in this area at the annual camp that concluded two days ago. The Montserrat troops will be accommodated by the Dominica Police Force while on duty there.

The assignment is expected to last for one week in the first instance.

Acting RMDF Commanding Officer Captain Peter White noted, “The last time we had similar deployment overseas was in 2004 when we were deployed to assist the government and people of Grenada after the passing of Hurricane Ivan.”

In the British Virgin Islands, Premier Dr Orlando Smith stated that, while the BVI was spared, the government wanted to reach out in a tangible way to the government and people of Dominica.

He said that a number of civic and other organisations in the BVI have galvanized themselves to provide significant support, supplies and assistance to the country.

“We are very proud of their initiative and generosity, and want to encourage as much support as possible. We are a giving people and as part of the Caribbean community we must do our part to help in rebuilding Dominica,” he said.

Smith added that the BVI government is also partnering with community organisations to transport much needed supplies to Dominica.