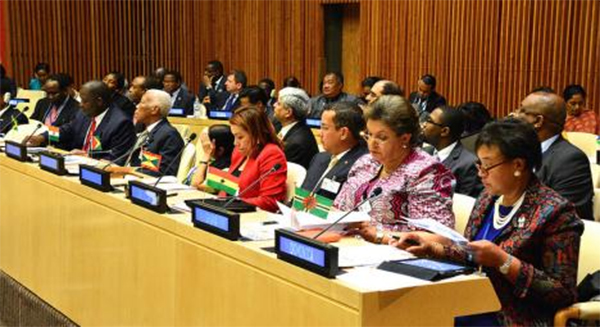 London, England — In addition to hosting the headquarters of the Commonwealth Secretariat and having Queen Elizabeth II as the organisation’s head, the British government, in defiance of long standing conventions, is alleged to be using the Caribbean in a “two-card trick” to have a sitting member of the British parliament elected as Commonwealth secretary general when the post becomes vacant in 2016.

“It is understood that the British are adopting a ‘two-way trick’, to get one of their own into the position. They want to put forward either Baroness Amos or Baroness Scotland. They are both black peers and former ministers who sit in the British House of Lords in Westminster,” said Kayode Soyinka, editor-in-chief of Africa Today.

In addition to pushing Guyanese-born Baroness Valerie Amos for the position, Britain has also appointed a Commonwealth envoy, David Concar, an official who was involved in the selection of the recently appointed Kenyan deputy secretary general responsible for political affairs.

The new envoy will reportedly spend between now and the elections for the post at the next Commonwealth Heads of Government Meeting (CHOGM) in Malta in November 2015 visiting every Commonwealth country to push the British candidature.

It is also alleged that the British calculate that, if they fail to get Amos through as their own candidate they have a fall-back candidate in the shape of another sitting member of the House of Lords and former British minister, Dominica-born Baroness Patricia Scotland.

Concern has been expressed that, if Britain succeeds with either Amos (on its own) or with Scotland (with Caribbean collusion), the Commonwealth will be seen by Africa and Asia once again as “British” with London having the Secretariat, the secretary-general and the headship of the organisation.

In particular, it is claimed that it will not be an organisation of benefit to the Caribbean. Indeed, it will be the reverse, with yet another multi-lateral organisation telling the region what is good for it.

Dominican Prime Minister Roosevelt Skerrit has claimed that he is sponsoring Scotland’s candidacy for the post because she was “born in Dominica”, even though she left there when she was just two years old and has never worked for any Dominica government, Caribbean government or Caribbean institution.

Scotland’s nomination has resulted in supporters and detractors weighing in on the issue.

“Given the baroness’s many ministerial positions in the United Kingdom, why is she not a UK government nominee?” one senior Caribbean minister asked.

On the other hand, Dr Nicholas Liverpool, a former president of Dominica, wrote a lengthy op-ed in her support.

Even though she is a sitting member of the British parliament, Scotland represented Dominica at two high level meetings of foreign minister in New York in recent months, which reportedly caused some consternation on the part of other attendees.

The first was the meeting of the Council for Foreign and Community Relations (COFCOR) held in New York, USA on September 25, 2014, which resulted in a number of contradictory statements and unanswered questions concerning the event.

This was followed by a meeting also in New York of Commonwealth foreign ministers at which Scotland represented Dominica, despite being a sitting member of the British parliament.