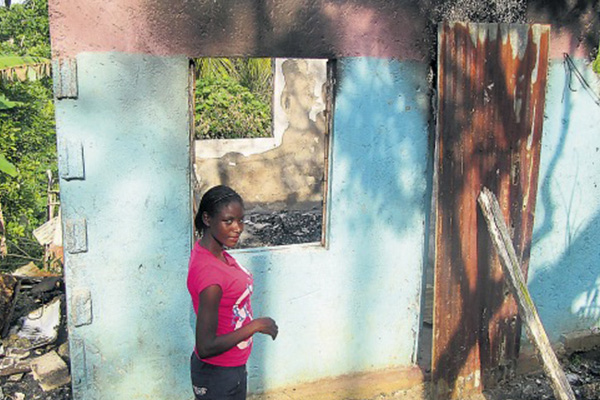 Burnt out – 11 left homeless after fire

Ocho Rios, St Ann — Stacey Ann Nelson was a far away from Hinds Town, St Ann, when she got the terrifying news that her family home was on fire. Shocked, she ran all the way home, but everything was already burnt to a crisp

“Mi reach long before all the fire truck, the way how mi run,” Nelson told the Jamaica Observer North East.

She explained that when the truck came everything was already destroyed, leaving the firefighters to focus instead only on the cooling-down operations.

“Mi feel stress,” said the matriarch of the household of 11.

The family still does not know what caused the early afternoon fire on January 7. Since the blaze, the family has been separated, with the adults and children staying at different locations.

“Mi lose everything: fridge, TV, DVD, and everything,” Nelson said.

Nelson said she has been fortunate to be able to stay with a sister. However, two of her children are now living with other relatives.

“Mi born and grow right here,” she explained, adding that this is the only place she has called home for many years.

Nelson said it has been a major struggle for the family since the fire.

Referred to as “mama” by children and siblings, Nelson said help has been offered by some of the schools the children attend, as well as community churches and political representatives; however, for her there is still a far way to go.

“Ah one roof mi want back over mi head,” the distraught Nelson said.

Not having a permanent job has made any hope of rebuilding her house, anytime soon, even more remote.

“It rough,” she lamented, explaining that she only works two days per week to try and make ends meet.

Nelson said any help the family can get will be well appreciated.

A relative, Nichelle Turner, who was at home at the time of the fire, was outside when she saw the flames, but there was little she could do but call for help. The fire quickly engulfed the dwelling, leaving homeless four adults and children aged 15, 13, nine, five, four, one, and two years of age. The children had already returned from school and so their school supplies were also destroyed in the fire.

“We lose everything,” Turner reiterated. The young woman said she did not know where to start as she does not have the necessary resources, but is hoping for the best so the family can once again be together.

Her children, aged 15 and 13 years old, have been staying with other relatives, away from their mother since the fire.

In the meantime councilor for the Beecher Town Division, Ian Bell has raised concerns about the length of time it takes the fire department to respond to fires. Bell brought up the matter in the recent St Ann Parish Council monthly meeting, but the fire department was not present to address his concerns.