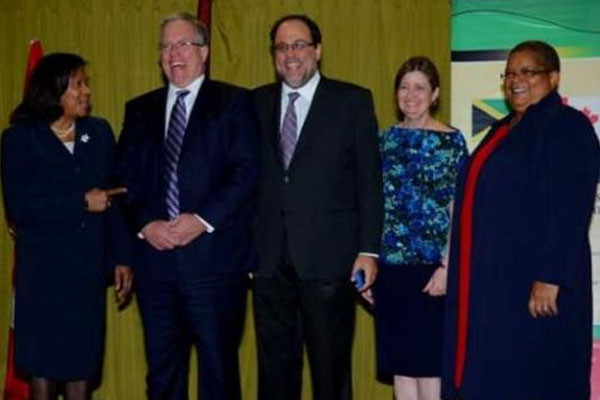 He gave the commitment, while addressing the Justice Undertakings for Social Transformation (JUST) programme partnership breakfast meeting held on Wednesday in Kingston.

The Canadian government currently provides support to the government of Jamaica (GOJ) for the implementation of a comprehensive justice reform agenda under the JUST programme. The five-year initiative, which commenced in 2011, is slated to end in 2016.

Minister of Justice, Senator Mark Golding, expressed gratitude to the Canadian government on behalf of the government of Jamaica, for its support for justice reform.

“It is clear that our development partners have recognized justice as a key sector for intervention. The reform agenda of the ministry and the government would be much more difficult, if not insurmountable… to execute without their support,” he stated.

Golding said the ministry intends to deliver tangible benefits through the JUST programme that would be apparent to all users of the courts.

Ready said the Canadian government is “very honoured to be associated with justice reform in Jamaica,” while commending the ministry of justice, the Jamaican Bar Association, the courts, the Office of the Director of Public Prosecution (DPP) and all partners engaged in the process.

He said the work to be undertaken through the JUST programme is revolutionary, because it aims to change the way business is done in the justice sector, noting that some initiatives will have direct impact on the way members of the legal profession operate.

The Canadian high commissioner hailed the social order component of the programme, which has the objective of ensuring that Jamaicans are aware of legal processes and procedures and the kinds of changes needed to make the system more efficient.

Other key activities through the programme include legal education and awareness; engagement of citizens on legal issues and justice reform; social context training, including gender equality and human rights; as well as study visits to Canada to observe best practices.

The JUST programme will assist some critical justice sector institutions in Jamaica to implement new processes to boost their capacity to manage and implement their core business, including the courts, the office of the DPP, Office of the Parliamentary Council (OPC), The Law Reform Department, and the Attorney General’s Chambers.

Ready also highlighted that the programme is assisting the justice ministry to transition towards a more policy-focused agenda, while the courts will be provided with new technologies, tools and processes that will reduce case backlogs, improve case management, and help make the resolution of cases more efficient.

The programme will also work with the OPC and ministries, departments and agencies (MDAs), in order to improve the legislative drafting and policy development processes.

Senior director for the Department of Foreign Affairs, Trade and Development (DFATD), Dr Gail Miller, also commended the ministry “for leading efforts to ensure the full implementation of justice reform strategies in Jamaica.”

Miller, along with deputy director, planning, Gwen Walmsley, is part of a two-member Canadian delegation visiting Jamaica from the DFATD.

“It is a privilege to accompany Jamaica on this path of reform in the justice sector. It is so important to all aspects of society. I am impressed with the scope and ambition of Jamaica’s justice reform agenda as well as the energy and dedication of all stakeholders,” Miller said.