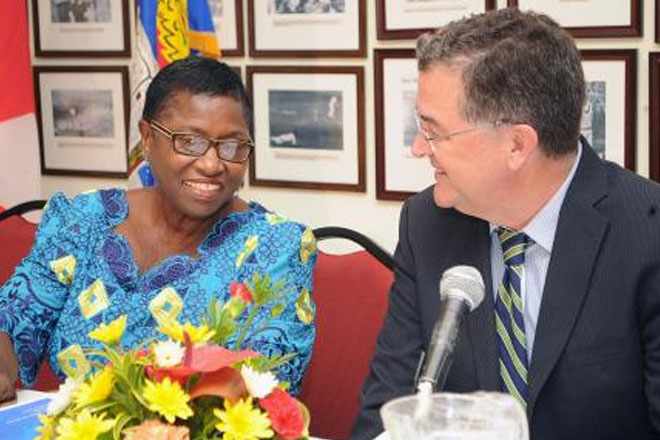 Bridgetown, Barbados — Assistance to the Caribbean Community (CARICOM) region in drafting legislation to further regional integration and economic growth, more legislative protection of vulnerable groups against discrimination, the training of mediators to assist parties in solving disputes without recourse to long and expensive court proceedings and a programme for sensitizing ordinary people about their rights under the law are among the benefits promised to CARICOM citizens as a new justice project takes effect.

Canadian High Commissioner Richard Hanley explained that the Canadian government was pleased to be able to provide CAD$19,200,000 in funding for the five-year regional justice sector reform project that is being implemented under a collaborative agreement with the University of the West Indies, Cave Hill Campus. The Canadian high commissioner described UWI as a strong and willing partner, praising the contributions to moving the project forward of outgoing UWI Cave Hill principal, Prof. Sir Hilary Beckles and the project director, Prof. Velma Newton.

Beckles, in a recorded message at the launch, hailed the project, which has as its ultimate outcome enhancing access to justice benefitting men, women, youth and businesses in 13 CARICOM member states. He welcomed the official launch of the IMPACT Justice Project that is designed to address deficiencies in the justice sector in CARICOM, outside of those that are directly related to the judiciary and the courts. He also thanked the government of Canada for its ongoing assistance to the region, and praised all those who were involved, especially Newton and the dean of the Faculty of Law Dr David Berry.

Newton gave an overview of an impressive array of activities undertaken during the five months that the project has been operational.

“In five months we have been able to achieve most of the targets set for the first year in the annual work plan. For example, we have been able to do training in the key areas of legislative drafting, mediation, arbitration and also expansion of legal databases,” Newton disclosed.

She also noted that the project would have significant socio-economic impact through drafting of legislation for the improvement of the CSME and OECS Economic Union.

Featured speaker at the Impact Justice launch ceremony, E. Anthony Ross QC, a noted Kittitian lawyer, who is principal of Professional Corp, Toronto, Canada, addressed the role of law in economic development, noting that the legal system is an enabling mechanism for development.

He observed that judicial integrity, maintenance of high standards and adherence to the tenets of the rule of law would increase investor confidence, and attract both local and foreign private investment by providing certainty and predictability in contractual arrangements, stability and citizenry well-being.

He pointed to administrative problems that the Impact Justice Project would address through mediation training, such as reducing court backlog.

Among the leading attorney’s wide ranging recommendations for legislatures was creation of new types of laws and approaches to facilitate change, innovation and competitiveness, setting and enforcing labour laws as well as a focus on citizens’ rights and market reform by increasing government accountability and transparency.

“Our system must not just benefit those on top but must alleviate some of the strain from those down below,” Ross said, emphasizing the importance of focusing on the poor and marginalized in our societies.