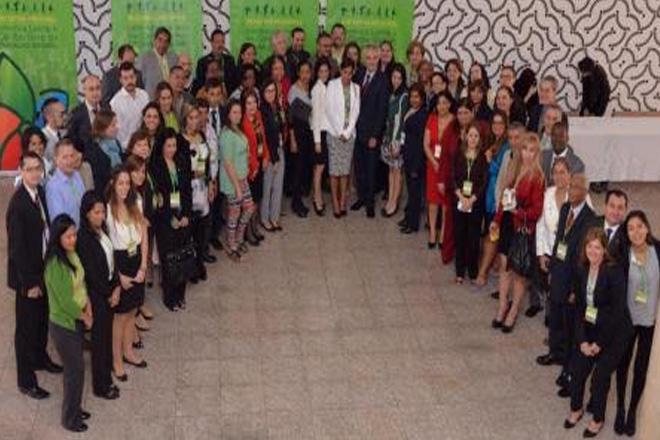 Brasilia, Brazil — From 1-3 July 2015, delegations from 25 countries of Latin America and the Caribbean, including The Bahamas, Guyana, Jamaica and Trinidad and Tobago, participated in a roundtable for south-south cooperation focused on combating child labour, with the signing of four formal agreements, the definition of 16 commitments for activities, and 50 expressions of interest for future collaboration.

According to ILO estimates there are still 12.5 million children who work in the Latin American and Caribbean region. During the inauguration of the event, Jose Manuel Salazar, ILO regional director for Latin America and the Caribbean, emphasized that is necessary to invest resources equivalent to 0.3% of GDP to eliminate child labour by 2025.

The roundtable was held within the framework of the regional initiative: Latin America and the Caribbean Free of Child Labour, which was signed by the governments of the region and supported by the ILO. The initiative seeks to accelerate the efforts to eliminate this practice. The Brazilian government convened the roundtable as a part of the Brazil-ILO South-South Cooperation Initiative.

South-South cooperation, implemented in a horizontal manner and promoting experience exchanges, the efficient use of available resources and international solidarity, is considered an important alternative at a time in which countries face the challenge to do more with less.

Lisa Bryan Smart, assistant director, Economic Affairs Department, Ministry of Foreign Affairs and Foreign Trade in Jamaica, shared her thoughts on the meeting: “I found the meeting to be very useful particularly within the context of discussing the issue of child labour through the modality of South-South Cooperation, which is emerging as a critical area of support for development. This approach to development is based on the notion that developing countries would benefit from collaborating around common problems and identifying relevant and cost effective solutions.”

The meeting participants exchanged ideas about strategies for resource mobilization, as well as good practices and mechanisms that facilitate the implementation of South-South cooperation initiatives.

The agreements that will be implemented in the next three to six months anticipate activities for the exchange of information and tools, training sessions, joint research, methodology transfer, and internships by specialists, among others.

Marva Ximinnies, director, Child Labour Unit, Ministry of Labour and Social Security, Jamaica, said, “Attending the workshop was a useful and worthwhile experience. I strongly feel that we are making progress and we should meet our target of a child labour free region.”

Salazar emphasized the fact that the regional roundtable had been organized in Brazil, “a country with which the ILO has developed an important partnership. The Brazilian Cooperation Agency (ABC) has contributed a significant quantity of resources for South-South cooperation, demonstrating leadership in these types of initiatives”.

The ILO regional director conducted his first official visit to Brazil after having assumed the role on June 1st.