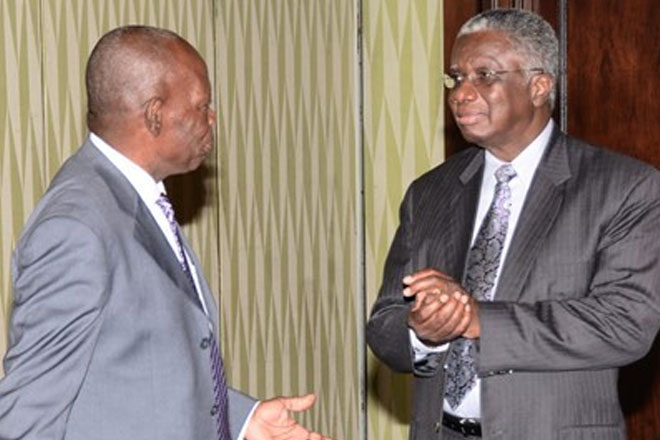 Bridgetown, Barbados (BGIS) — Those Caribbean governments that have not yet passed proceeds of crime legislation are being urged to do so.

Consul general at the US Embassy, Mark Bysfield, made this call on Friday while addressing the official opening of the Regional Security System (RSS) Council of Ministers’ Meeting in Barbados.

“We anticipate that the first successful prosecutions of civil asset forfeiture cases will occur this year. Civil asset recovery legislation deprives drug traffickers and other criminals of the incentive to bring their operations to your shores.

“Our model law includes a dedicated forfeiture fund, which requires that 100 per cent of all seized proceeds go back to support police, prosecutors, victim restitution, substance abuse prevention and payment of RSS dues,” he explained.

He insisted that civil asset recovery could be used to fund the commitments of regional governments to the RSS, while attacking the wallets of drug cartels.

Acknowledging that these were difficult economic times, Bysfield, however, urged member states to exercise due diligence and caution in the administration of economic citizenship programmes. He added that, despite limited means, it was imperative that resources were provided for citizen security and stability in the region.

Head of the European Union delegation, Mikael Barfod, said the region faced serious security threats from various challenges and listed them as including drug trafficking, money laundering and its potential to foster corruption, economic disenfranchisement, and transnational organised crime.

Barfod stressed that effective responses required a mix of governmental policies and strategies and listed them as including civil asset recovery, education and protection of victims, building capacities of law enforcement agencies, and modernising justice systems.

“We must work together in modernising justice systems that comport with the rule of law. This means capacities to investigate and prosecute complex crimes and proceedings that are swift, fair, efficient and transparent… Police strategies may be diversified so that forces interact more and more within communities. This has been a success in many countries,” he contended.

The ambassador also suggested that there was need for early intervention among youth and families at risk.

“This includes preventing domestic violence through gender-sensitive early and continuous education and behavioural change of perpetrators, as well as strengthening safety nets. In short, community cohesion should be promoted and a means devised to address the problem before it becomes uncontrollable,” he added.

Canadian high commissioner, Richard Hanley, also acknowledged that resources were scarce and some governments were unable to pay RSS dues. However, he encouraged the governments to pay up in an effort to sustain the fight against crime and improve security in the region.

Hanley stressed that the RSS had been doing excellent work in the region to improve security for the citizens and those of the Americas.

“Drug seizures are up significantly, demonstrating the success of the Regional Security System and its local partners and international donors such as Canada and others,” he said.