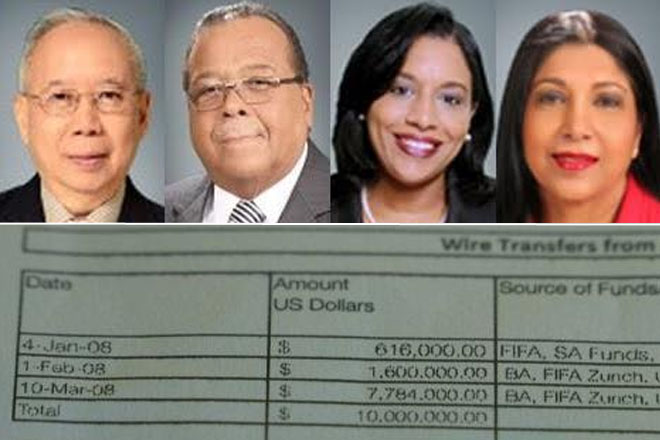 Port of Spain, Trinidad — The Trinidad Express has reported that a director of its ultimate parent company, One Caribbean Media Limited (OCM), is the owner of a Trinidad-based business that laundered money through black market currency trades for former FIFA vice president Jack Warner, who is one of 14 senior FIFA officials and others indicted in New York on multiple counts of racketeering, corruption and money laundering.

According to the indictment, Warner used almost half of a US$10 million bribe he is alleged to have received from South Africa to promote its successful bid to host the 2010 World Cup in what is described as “Scheme #1 – Wire Fraud and Money Laundering”, in black market currency trades through JTA Supermarkets in Trinidad.

The BBC reported that the funds in question were paid in three transactions – on 4 January, 1 February and 10 March 2008 – from FIFA accounts into Confederation of North, Central American and Caribbean Association Football (CONCACAF) accounts in Trinidad controlled by Warner.

According to US prosecutors, the money was mostly paid back to Warner in local currency. How the remaining money was disbursed is currently unknown.

Carl Mack, owner and executive chairman of the JTA Group, is also a director of OCM, the holding company for the Caribbean Communications Network (CCN) group, the owner of the Trinidad Express Newspapers.

Mack has denied any knowledge of the substantial transactions passing through his business.

As on two previous occasions when comment was sought concerning irresponsible and biased reporting by the Trinidad Express, a request for reaction to this latest matter sent by email over the weekend to Gollop; Dawn Thomas, OCM group chief executive officer; and Shida Bolai, chief executive officer of CCN went unanswered.