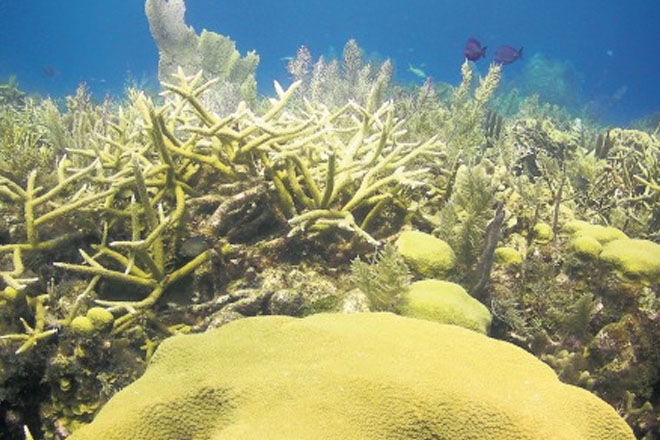 Bridgetown, Barbados (CMC) — Reefs in the Caribbean are among the world’s reefs that have been hit by a major episode of bleaching.

Scientists have confirmed that corals in the Caribbean, Atlantic and Pacific are suffering from the worldwide bleaching episode that is said to be the worst on record as the warming Pacific current, El Nino, increases in strength.

The US National Oceanic and Atmospheric Administration (NOAA) warned it may affect more than 38 per cent of the world’s reefs, and kill over 12,000 sq km of reefs.

Bleaching happens when corals under stress drive out the algae known as zooxanthellae that give them colour.

Reefs are under multiple threats including pollution, over-fishing, sedimentation and damage from boats and tourism.

Man-made climate change also contributes, as the oceans are absorbing about 93 per cent of the increase in the earth’s heat.

Some scientists are warning that spectacular reefs – with branching corals and fan corals – are unlikely to survive changes in temperature and pH by the end of this century. That’s if they are not killed first by other damaging local activities.

The current bleaching episode was predicted by NOAA and confirmed by researchers and citizen scientists in the Caribbean.

Although reefs represent less than 0.1 per cent of the world’s ocean floor, they help support about a quarter of all marine species.

The NOAA says the livelihoods of 500 million people and income worth over US$30 billion.