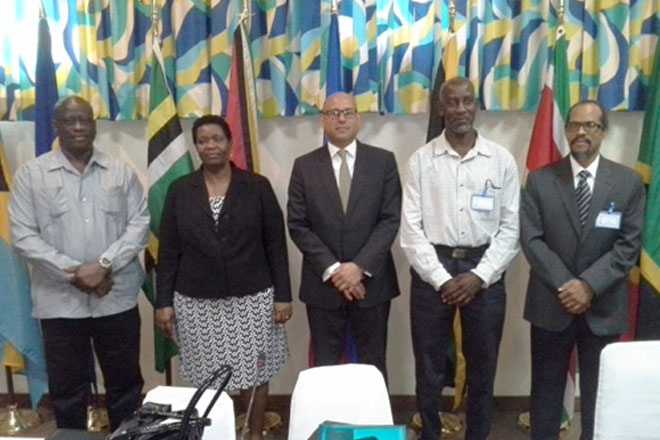 Caribbean urged to reverse decline in aquaculture at Grenada meeting

Senator Simon Steele, parliamentary secretary in the ministry of agriculture, lands, forestry, fisheries and the environment of Grenada, the keynote speaker for the event, elaborated on some of the challenges: among them international and local economic pressures and rising input costs; threats to fish stocks and habitats from pollution and illegal, unregulated and unreported fishing; as well as the adverse effects of climate change.

“We have no shortage of challenges,” said Steele, adding, “To confront these challenges as small island developing states with vulnerable economies, it is of critical importance that we strengthen our cooperation and unity within the region, since we share common principles in developing, managing, and utilizing the living marine resources in a responsible and sustainable manner – which is why forums such as this are of such importance to us.”

Milton Haughton, the executive director of the CRFM, highlighted the need for the region to make a more concerted effort to reverse the trend of declining aquaculture in the Caribbean — a trend which runs contrary to the global upswing, which shows aquaculture outpacing capture fisheries.

“In the 1970s, most of the seafood we consumed was harvested from wild marine stocks with aquaculture contributing just 3% of total fish production. Today, aquaculture is the fastest growing food production sector in the world,” Haughton said.

Haughton said that the Caribbean must begin to put in place the systems and regulations needed to overcome the impediments being faced in the region.

“We do need to provide the necessary legislative and regulatory framework, the policy support and the incentives to our fish farmers and private sector investors, so that they can grow the sector and increase production not only for local consumption but also for exports, to earn foreign exchange, to generate employment opportunities, and to create wealth for our people,” the CRFM executive director urged.

During the past year, the CRFM, with funding from the Technical Centre for Agricultural and Rural Cooperation (CTA), conducted a review of aquaculture in region and it prepared a five-year plan of action to guide development of aquaculture for the coming years.

“Our region is endowed with a vast amount of marine space which provides significant opportunities that can contribute to the economic and social development of current and future generations. It is fundamental that we engage in efforts that would enhance capacity and collaboration among our peoples at all levels,” said Marilyn Austin-Cadore, permanent secretary in the ministry of forestry and fisheries, who noted that this was the first time the forum was meeting in Grenada.

During the forum meeting, Andrew Magloire, chief fisheries officer of Dominica, turned over the chairmanship of the Caribbean Fisheries Forum to his counterpart from Grenada, the host country.

Magloire, who proceeded on preretirement leave after the meeting, said that while the CRFM and the forum have grappled with “humungous challenges,” they have also enjoyed “humongous successes.”

“Central to this, we see the ratification and acceptance or adaptation of the common fisheries policy, which has been a mechanism that we have been working on for the last 12 years, and it is most heartening for me to stand here as outgoing chair knowing that we have finally come to the point of the acceptance [and] adoption of the Caribbean Community common fisheries policy,” Magloire said.

He added that a major challenge remains: that is, bringing Caribbean countries together in the recognition that the region cannot sustain and develop its fisheries without integrating its processes in order to achieve the sustainable utilization and governance of the vital fisheries resources across CRFM states.

He called on CRFM member states to support the CRFM in bringing forth a work program geared towards sustainability and responsible governance of the fisheries resources in the region.

The meeting concluded after deliberations on the regional spiny lobster declaration, which the forum is recommending for adoption by the CRFM’s Ministerial Council when it meets in Grenada in May.

Representatives of CRFM partner agencies and institutions, such as the Food and Agriculture Organization of the United Nations (FAO), the Japan International Cooperation Agency (JICA), the Caribbean Natural Resources Institute (CANARI), the University of the West Indies (UWI), and fisherfolk organization, as well as private sector representatives, such as the representative of Spice Isles Fish House in Grenada, were among those who attended this week’s forum meeting.