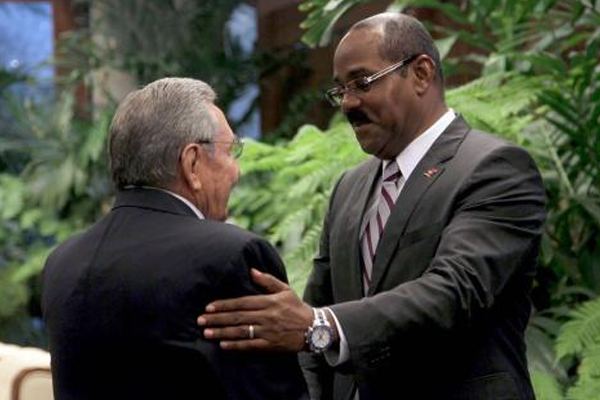 St John’s, Antigua — Chairman of the Caribbean Community (CARICOM) and prime minister of Antigua and Barbuda, Gaston Browne, has welcomed the historic decision announced on Wednesday by US President Barack Obama to ease restrictions on the movement of people, goods and capital between the United States and Cuba.

“This announcement is the end of a long and wasteful journey in our Hemisphere and finally allows for dialogue and exchange between all the nations of our hemisphere in a civilized and constructive manner.

“Both the United States and Cuba have a great deal to contribute to the well-being and development of our Hemisphere, and our peoples can now look forward to new energy and new resources being unleashed in a spirit of cooperation. President Obama deserves praise for his enlightened decision,” Browne stated.

Stuart said that Obama’s announcement added to the historicity of his presidency, and highlighted “the capacity of an American president to respond to the imperatives of history”.

“I think that the people of Cuba endured a long, dark night of isolation in relation to the United States of America, and that they too will be glad to know that that long dark night is issuing into a bright new dawn in the relationship between the two countries,” Stuart added.

“Today is a historic day in the life of the Cuban people. Today, the United States has answered the call of humanity. Today, the United States has finally heard what Caribbean leaders have always said, and what has been proven: their decades’ long policy of isolationism of Cuba has not worked. It is way past time to remove the embargo. It is the progressive, wise, and right thing to do,” Mitchell said.

The move by Obama to establish formal relations with Cuba has also been welcomed by Guyana’s President Donald Ramotar, who described it as “a major step forward in the right direction”.

Cuba and the United States must be congratulated for the steps being taken at present, the president said, as it was “long overdue, but better late than never”.

Commenting on the easing in US-Cuba relations, Russia’s ministry of foreign affairs said the decisions and concrete steps taken by the US and Cuba to normalise bilateral relations meet the interests of both countries and global security in general.

Meanwhile, US business interests have applauded the liberalisation of US relations with Cuba.

Gary Shapiro, president and CEO of the Consumer Electronics Association (CEA) said that re-establishing diplomatic relations and authorizing expanded commercial and financial opportunities between the US and Cuba will, in the long term, benefit American and Cuban citizens alike.

“These measures will provide a new opportunity for US economic growth and increase Cubans’ ability to communicate freely with the rest of the world.

“Specifically, we welcome and are particularly excited about the new measures allowing the commercial export and sales of consumer communications devices, software, hardware and services. These efforts will provide exciting new market opportunities for our members and parallel our advocacy for expanded free trade globally. More, these measures will increase Cubans’ access to the benefits consumer communications technology brings to the world — eliminating the borders of time and geographic location to bridge global communities, democratize access to information and entertainment content, and provide new hope for promoting democracy and human rights,” Shapiro said.

A federal agency, the Small Business Administration (SBA) also weighed in, saying that Obama’s decision to reestablish diplomatic relations with Cuba and ease some commercial and travel restrictions is a step toward increased freedom and economic opportunity in the hemisphere.

“The prospect of greater liberty and stronger commercial ties presents ordinary Cubans with a renewed chance to provide for their families and live to their fullest potential. We are convinced that the best way to ensure opportunity and democracy in Cuba is by empowering the Cuban people – rather than denying them access to resources. At the same time, American businesses, small and large, stand to gain access to an important new market for goods and services only 90 miles from our shores.

“While there remains much work to be done, this is an important start. We at the SBA stand ready to work with American small businesses to realize the full potential of today’s historic announcement,” the SBA said in a statement.

In the wake of Obama’s announcement, press freedom organisation Reporters Without Borders (RSF) asked when Cuba would improve relations with its own journalists.

“Now that diplomatic bridges are being built, it is high time that Cuba improved relations with its own independent journalists, and it could start by immediately releasing the two journalists and the blogger who are unjustly detained,” said Claire San Filippo, the head of the Reporters Without Borders Americas desk.

“A thaw in relations also needs an end to threats and intimidation, and the possibility for news providers to carry out their activities freely and without being subjected to harassment. More than ever before, Cubans need pluralist, independent and diversified information,” San Filippo added.

Freedom of information is extremely limited in Cuba. The government maintains a complete monopoly of news and information and tolerates no independent media aside from a few Catholic Church magazines.

Only state media are permitted (national radio and TV, two daily newspapers –Granma and Juventud Rebelde – and their local versions). This drastically limits access to freely-reported and independent information.

The authorities also control the coverage provided by foreign journalists by cherry-picking who gets accreditation and by expelling those whose reporting is regarded as overly negative.

Internet access is very limited because of the prohibitive cost and because it is closely controlled. Independent Cuban news websites that are based abroad, such as Payo Libre, Hablemos Press, Cubanet, Cuba Encuentro and Martí Noticias, cannot be accessed from within Cuba.

The authorities often blame the low Internet penetration rate on the US embargo but this excuse ceased to be valid when the ALBA-1 fibre-optic cable linking Cuba to Venezuela became operational, leaving a political desire to restrict access as the only possible explanation.

As well as preventing media pluralism, the authorities continue to persecute journalists and bloggers who criticize the regime.

The last of the journalists arrested during the 2003 “Black Spring” crackdown was freed in 2011, but professional journalists, citizen-journalists and bloggers have been subjected to threats, smear campaigns, arrests and arbitrary detention ever since then.

Cuba is ranked 170th out of 180 countries in the 2014 Reporters Without Borders press freedom index, the lowest position of any country in the Americas.