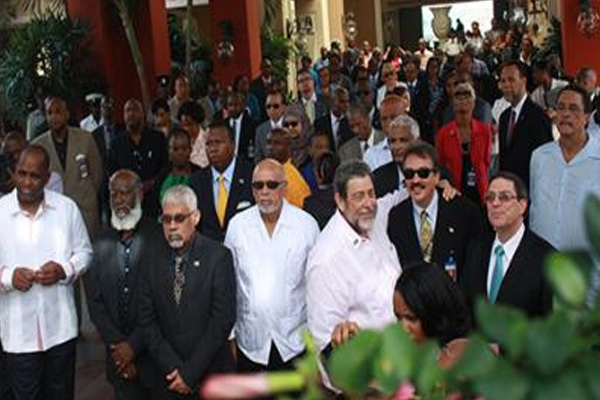 St John’s, Antigua — In a statement on regional citizenship by investment programmes issued at the conclusion of last week’s Caribbean Community (CARICOM) meeting in St John’s, Antigua, heads of government urged all member states to “co-operate and co-ordinate their regulatory systems” with respect to such programmes.

St Kitts and Nevis in particular has been attempting ongoing damage control in relation to its citizenship by investment programme following an advisory issued by the US Treasury Department’s Financial Crimes Enforcement Network office (FINCEN) to US financial institutions warning them to closely scrutinize any business conducted with people traveling on St Kitts passports.

CARICOM heads emphasised the need to adhere to the most rigorous international standards to safeguard the integrity of St Kitts and Nevis and its citizenship programme.

Such economic citizenship programmes are operated by a number of CARICOM countries including Antigua and Barbuda, Dominica and Grenada, as well as St Kitts and Nevis. Others, including The Bahamas and Saint Lucia, are actively looking at adopting similar programmes.

Meanwhile, the US government has reportedly put banks in Antigua and Barbuda on notice that it will be monitoring their activities to ensure that “dirty” money does not filter into the system through its citizenship by investment programme.

The manager of an international bank in Antigua told local media that the banking fraternity has been warned that if caught accepting money from questionable sources, they run the risk of losing the services of correspondent banks in the United States.

“If we are found in breach, it means we will not be able to conduct business in the United States or anywhere else outside of the region,” the bank official said.

In the meantime, the St Kitts and Nevis government is reportedly taking steps to address the concerns expressed in the FINCEN advisory. However, according to the US government, past promises to improve lax controls have not been kept.

Following a series of recent revelations concerning a number of individuals that have successfully purchased St Kits and Nevis citizenship despite questionable backgrounds, Prime Minister Dr Denzil Douglas claimed that their due diligence reports were clean and the negative events occurred after they had been granted citizenship.

However, former national security minister Dwyer Astaphan has directly contradicted this assertion, pointing specifically to the case of entrepreneur Roger Ver, the founder of Passports for Bitcoin.com, who has been offering to accept the virtual currency Bitcoin for St Kitts and Nevis citizenship by investment applicants.

Ver was himself granted St Kitts and Nevis citizenship earlier this year despite having a previous criminal record, something that is specifically proscribed by the programme rules.

“Roger Ver was granted citizenship on February 13, 2014. Roger Ver was sentenced to 10 months… in a Federal prison in the United States in October 2012,” Astaphan noted.

Astaphan also claimed that certain bank accounts in Basseterre related to the citizenship programme are being watched and could eventually be frozen.

“When I tell you… that there are accounts that are being watched and targeted now for freezing, and the names attached to those accounts will shock certain people, but they don’t shock me. I’m telling you this is a very serious thing,” he added.