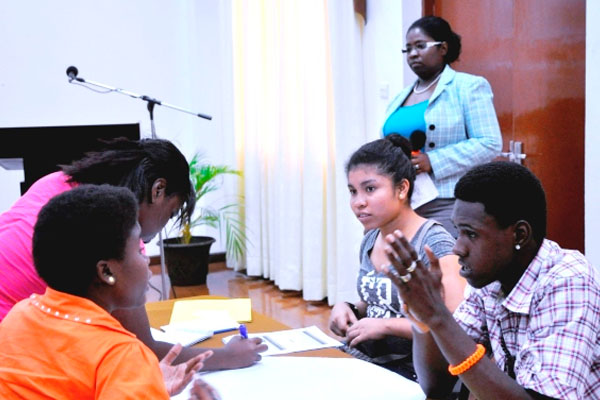 A group of young people in Guyana began foundational training in computer animation on Monday (28 July) aimed at safeguarding cultural heritage, steering young people away from crime and violence, and offering them a different career option.
The training, which is underway at the Guyana International Conference Centre, is being undertaken as a partnership among the Caribbean Community (CARICOM) Secretariat, the United States government and Animae Caribe. The exercise is offering the participants the opportunity to use technology to tap into their creativity and enter a very lucrative field which spawns advertising, education, and the film industry, and combines art and technology.

CARICOM Member States recently ramped up efforts in developing cultural and creative industries of which animation is a key component. Programme Manager of the Culture and Community Development sub-programme of the CARICOM Secretariat, Dr. Hilary Brown said in 2010, the CARICOM Secretariat began exploring the field as one of the creative industries with potential for development in the Caribbean.

The workshop is the fourth in a series under the CARICOM–United States Agency for International Development (USAID) Crime and Violence Prevention Project and the CARICOM and Animae Caribe regional initiative called “Animating the Caribbean” that engages young people between 15-29.

The partnership with the United States (US) government comes under the umbrella of the Caribbean Basin Security Initiative (CBSI) between the US and Caribbean governments, which was announced by US President Barack Obama in 2009 during the Fifth Summit of the Americas in Trinidad and Tobago.

President Obama, in announcing the CBSI initiative, had emphasized the need for critical development in communities through support for social justice programmes and the importance of providing opportunities for education, jobs, and careers for young people in the Region, Chargé d’Affaires of the United States Embassy in Georgetown, Guyana, Mr. Bryan Hunt said at the opening of the workshop on Monday.

“Since the President’s announcement, the U.S. government has partnered with Caribbean governments, regional institutions such as CARICOM and the OECS, the private sector, civil society, law enforcement and the judiciary to: improve legal and regulatory frameworks, support diversion and alternative sentencing for youth offenders; reintegrate youth offenders into society and the workplace; increase youth employment, expand education and skill-building opportunities for youth; improve literacy and numeracy, increase primary-to-secondary education rates, provide remedial education for young adults; support community-based policing, and educate communities to effectively collaborate with police on community safety issues and other activities,” he explained.

The animation skill-building workshop, he added, expands the work that the Caribbean Community has been doing under the CBSI partnership, investing in youth training in a science and technology field that is very relevant today.

Mr. Alfred King, Permanent Secretary of Guyana’s Ministry of Culture, Youth and Sport, which is also partnering with the CARICOM Secretariat for the initiative, lauded the workshop for its potential to counter unemployment among the youth. Noting that animation was responsible for a booming multi-billion dollar industry in the United States, he said it has similar potential for the Caribbean Region.

“We can now create an alternative to drive employment for young people,” Mr. King said, as he urged a reorientation of the Region’s education system to tap into the creative technologies. He charged the youth participants to seize the opportunity of the emerging trend of animation production in the Region.

Two one-day workshops were previously held in Suriname during CARIFESTA XI in August 2013, with approximately fifty young people benefiting from the training. A third one-day workshop involving twenty young inmates was held at the Youth Training Centre (YTC) in Trinidad and Tobago in October 2013 prior to the Animae Caribe Animation and Digital Media Festival. However, this workshop in Guyana is the first Community-based intensive short course in animation.

A critical component of this workshop involves using animation to safeguard the cultural heritage of the Caribbean. This is being done through an introduction to the Caribbean’s oral tradition to orient the participants in the rich culture and diversity of the Region. The participants were encouraged by Dr. Brown to design their storylines using Caribbean personalities and folklore.

She told the participants: “We need to hear and see more of our own Caribbean stories because these help us to develop our own identity, to make us proud of what we have and learn to appreciate our rich culture and diversity.”

Highlighting the rareness of the opportunity, Mr. Bryan Hunt told the youth: “Opportunities like this do not come very often. Be sure to enjoy the experience and participate fully.”

The US government, he said, remained committed to investing in youth in the Caribbean as a means of investing in the future, building human capital and supporting the sustainable development of the Region.

The closing ceremony of the workshop will feature the presentation of the short animated films that the participants would have produced over the course of the training.