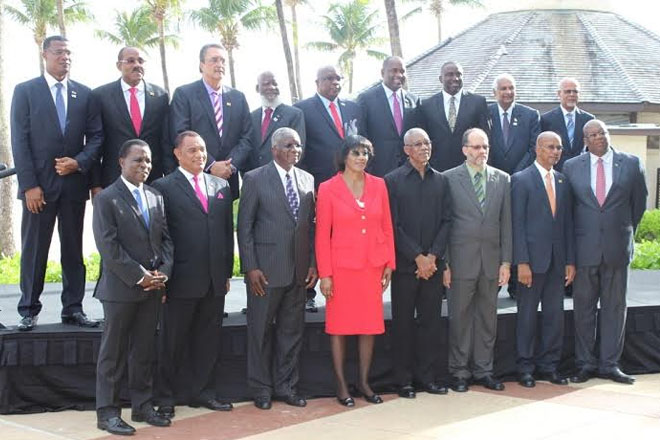 Speaking during the closing press conference on Saturday night, Stuart said he and his colleagues focused on three major areas: energy; bolstering education systems to build the social and economic resilience of countries; border issues – particularly the existing dispute between Venezuela and Guyana – and the looming humanitarian crisis in Haiti “created by the actions of the Dominican Republic”.

On the issue of energy, Stuart said the leaders welcomed the establishment of a Caribbean Centre for Renewable Energy, which will be the implementation hub for sustainable energy activities and projects within the Caribbean. He added that Barbados would be the host country for this centre.

The CARICOM chairman further disclosed that the government of Trinidad and Tobago had proposed the creation of a Caribbean Energy Fund, which received the support of the other heads. During their discourse, the leaders also addressed the ongoing border dispute between Venezuela and Guyana. Stuart cautioned, however, that it was not one that could be resolved with “the snap of a finger”, as it was a very old dispute.

“We met with a delegation from Venezuela and we tried to get some of those issues sorted out. Of course, the main target of that decree was our original CARICOM member state… the co-operative Republic of Guyana. And, therefore, we felt as a matter of principle and solidarity with our CARICOM brothers and sisters in Guyana, we had to take a stand,” the chairman stated.

He continued: “Border issues are inherently very difficult and, therefore, what one has to aim for is a cooling of tempers whenever they flare up. We do not think there can be any compromise as far as Guyana’s territorial borders are concerned….”

Stuart pointed out, however that CARICOM also enjoyed cordial relations with Venezuela, and was not about “to disrupt or pollute” that relationship.

Turning his focus to the treatment of Haitians in the Dominican Republic, the chairman said that CARICOM would “fight” for its Haitian brothers and sisters.

“CARICOM’s position is extremely clear; we are going to fight this issue to the end…and we will not rest until we get that situation brought under control. More and more attention is being drawn to the horror of the situation which Haitians are facing in the Dominican Republic. We are sure that the robustness of public opinion, global opinion on this issue will help in the resolution of this matter,” Stuart asserted.

Other matters discussed during the three-day conference were, access to concessional development financing for Small Island Developing States – the leaders believe that a vulnerability measure instead of one based on GDP per capita should be used to determine the economic health of these islands; and a universally binding agreement that would include a limit on global warming to below 1.5 degrees centigrade with regards to the United Nations Framework Convention on Climate Change.

Talks also centred on an assessment of decision-making mechanisms within the Caribbean community in light of the fact that decisions made within CARICOM territories were all subject to review by the Caribbean Court of Justice.

“Generally speaking, I think we had a successful conference. As I said in my opening address on Thursday evening, there will always be things that the Caribbean Community has not yet been able to do, and there will always be things that we have already done that it can be argued that we can do better. But, in the context of the realities we now face, I am satisfied, and I think the consensus of the conference was, at its close, that we had a successful CARICOM conference,” Stuart emphasised.