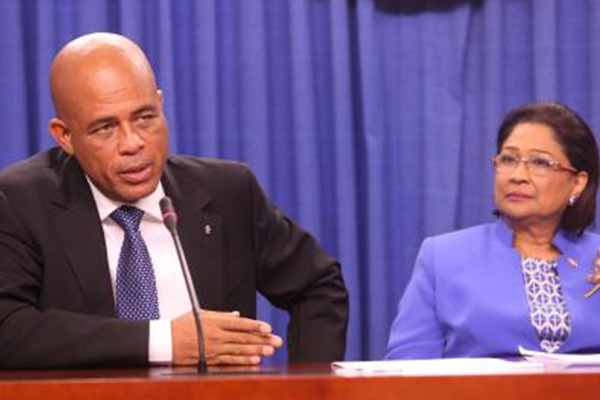 Port of Spain, Trinidad — The Caribbean Community (CARICOM) has shut all diplomatic doors on the Dominican Republic, beginning with the deferral of that country’s application to become a member of the regional bloc.

“In the circumstances and in the light of the values and the principles, which have been underpinned in the revised treaty of Chagaramas, CARICOM has determined that it will defer consideration of the application by the Dominican Republic for membership of CARICOM.

“As chair of CARICOM, I intend to raise this matter for action by several bodies of which we are members, such as the Association of Caribbean States (ACS), the Community of Latin America and Caribbean States (CELAC) and we will maintain our interest and active participation at the Organisation of American States (OAS),” current CARICOM chair and Trinidad and Tobago’s prime minister, Kamla Persad-Bissessar said.

It cannot be business as usual; this is a human rights issue, she told the media in Port of Spain on Tuesday.

In a laundry list of dos and donts, Persad-Bissessar outlined the conditions under which CARICOM and the Dominican Republic can see eye to eye once more:

“CARICOM has reviewed the ruling of the Dominican Republic constitutional court, which directed that the government to develop within 90 days a national plan for the regularisation of illegal aliens and then to implement the plan.

“CARICOM has noted with concern the requirement of the central electoral board in the Dominican Republic to turn the list of aliens illegally registered in the civil registry over to the ministry of the interior and the police.

“CARICOM is calling on the Dominican Republic to ensure the immediate protection of those persons negatively affected by the ruling and to adhere to its international human rights obligations under the Inter-American Court of Human Rights, the Convention on the Rights of the Child and the Inter-American Convention on Human Rights, amongst others.”

“CARICOM is ready to support any process which results in the reinstatement of the basic human rights of those affected; and welcomes the views of civil society representative with whom we met this morning and those who met with the secretary general of CARICOM in Guyana, submitting a region-wide petition on behalf of concerned citizens of the Caribbean Community.”

Persad-Bissessar continued that CARICOM is looking forward to the outcome of the visit of the inter-American Commission on Human Rights to the Dominican Republic in early December. She said that Trinidad and Tobago will continue to work with the Dominican Republic and other partners in the region and at a wider international level towards a swift resolution of this matter.

The CARICOM chair said she takes note of an undertaking to CARICOM by the president of the Dominican Republic, promising that no one will be deported.

“I take note of the communication received from Danilo Medina this morning that the government of the Dominican Republic will not deport any of the persons affected by the ruling of the constitutional court, and measures will be taken to ensure that no one is deported.” Persad Bissessar said.

CARICOM expects these assurances to be honoured, she added.

University of the West Indies professor Norman Girvan led a civil society group, which met with the CARICOM heads on Tuesday. Persad Bissessar praised the group for its efforts.

CARICOM is prepared to engage the Dominican Republic once that country operates in good faith, takes immediate and credible steps as part of an overall plan to resolve the nationality and attends to these issues in the shortest possible time, noted the CARICOM chair.

In a press release, CARICOM condemned what it sees as the “abhorrent and discriminatory ruling” of September 23, 2013, of the Constitutional Court of the Dominican Republic, which retroactively strips over 200,000 Dominicans of Haitian descent of citizenship, rendering them stateless with no recourse or appeal.

“Moreover, we call on the global and regional community to pressure the government of the Dominican Republic to adopt urgent measures to ensure that the jaundiced decision of the constitutional court does not stand and that the full citizenship rights of persons of Haitian descent, born in the Dominican Republic are guaranteed. The Caribbean Community accords this matter the highest priority,” the CARICOM press release said.