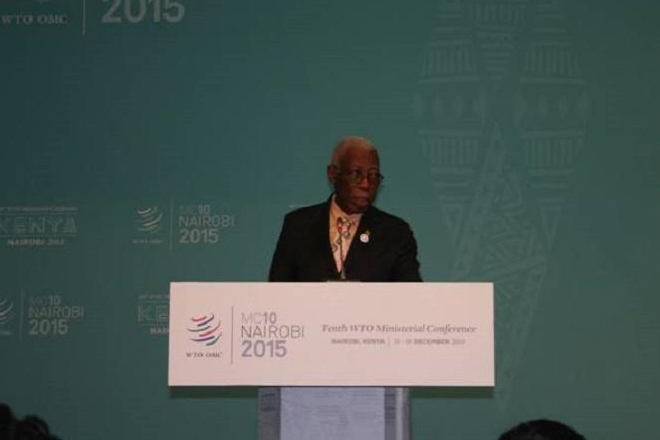 (Caribbean360) The Caribbean Community (CARICOM) has urged the World Trade Organization (WTO) to join a successful year for multilateral diplomacy by delivering trade deals which will drive global economic growth and uplift the poor.

Jamaica’s Minister of Foreign Affairs and Foreign Trade, Senator A.J. Nicholson made the call yesterday in his address, on behalf of the Caribbean Community (CARICOM), to the plenary session of the Tenth World Trade Organization Ministerial Conference in Nairobi, Kenya.

“2015 has been a good year so far for multilateralism,” Senator Nicholson told the conference.

“The decisions taken on Financing for Development, the 2030 Sustainable Development Agenda, and most recently, COP21, give us hope that the world community can collectively find solutions to pressing global issues. CARICOM hopes that this meeting in Nairobi will take meaningful decisions which will signal that the multilateral trading system, embodied in the WTO, can do the same.”

Nicholson said CARICOM hopes the Conference will adopt, among other things: decisions relating to the G90 proposals on Special and Differential treatment provisions including those related to small, vulnerable economies and least developed countries; agricultural issues, including the Special Safeguard Mechanism, which was proposed by the G33 in November, 2015; fisheries subsidies; the work programme on small economies; and special measures for least developed countries.

He added that CARICOM has been a strong supporter of a rules-based multilateral trading system and joined the consensus to launch the Doha Work Programme, commonly known as the Doha Development Round.

However, he added, “we regret that after 14 years of negotiations, we have not been able to reach an agreement which would have delivered the development dimension which brought us to the negotiating table”.

“We recognize that it may be necessary to discuss, post Nairobi, appropriate ways in which we can address the issues in the Doha Agenda, in order to achieve successful outcomes. In this effort, it is vital that we preserve and secure the progress achieved over the past years, particularly those contained in our Ministerial decisions and negotiating texts which relate to special and differential treatment, less than full reciprocity, special measures and flexibilities for small and vulnerable economies and least developed countries,” he said.

The business of the WTO – an international intergovernmental organization dealing with the formulation and implementation of international trade rules – is conducted through the Ministerial Conference, held every two years. The current conference will end tomorrow.