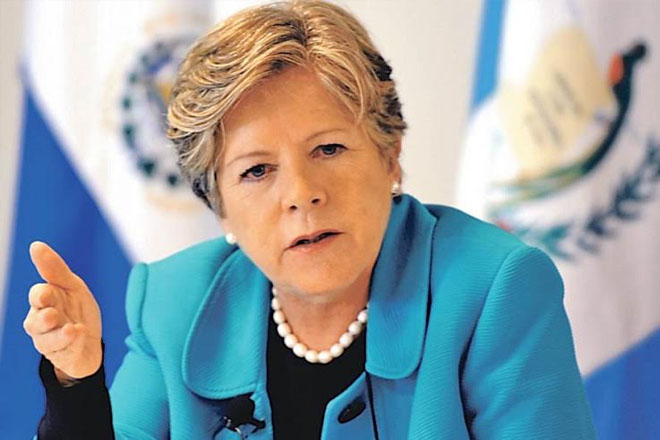 Case for Caribbean debt relief being made at international financing conference

Addis Ababa, Ethiopia — The United Nations’ Economic Commission for Latin America and the Caribbean (ECLAC) will be making a case for the International Monetary Fund (IMF) and the World Bank to give debt relief to countries in the region when an international financing conference begins in Ethiopia today.

Following up on her suggestion in Barbados on July 2, ahead of the CARICOM Heads of Government Conference, ECLAC executive secretary Alicia Bárcena will present the debt relief proposal and call for the creation of a regional resilience fund, at the July 13-16 Third International Conference on Financing for Development.

In 2013, Antigua and Barbuda, Barbados, Grenada, Jamaica and St. Kitts and Nevis were among the 20 most indebted countries in the world, according to the ratio of their public debt to their Gross Domestic Product (GDP). That year, the total debt burden, both internal and external, of 15 Caribbean countries amounted to US$46 billion, or 71 per cent of sub regional GDP.

According to ECLAC’s figures, the external public debt in seven countries with available and complete information – Belize, Dominica, Grenada, Guyana, Jamaica, St. Lucia and St. Vincent and the Grenadines – totals almost US$11 billion. Of that amount, 40 per cent is multilateral and 14 per cent is bilateral, while the rest is private debt that is publicly guaranteed.

Making its case for debt relief against that background, ECLAC said the tax adjustments that countries would have to make to reduce debt to sustainable levels would be “so tough that they would put countries into recession”.

“Additionally, the organization stresses that this debt has not been the result of political errors, poor fiscal management or the global financial crisis, but rather stems from external shocks, aggravated by the inherent vulnerability affecting the Small Island Developing States (SIDS) of the Caribbean, and the decline in foreign direct investments in recent decades,” it said.

ECLAC added that Caribbean countries, which are considered to be middle-income, have limited access to external loans with favourable conditions, which forces them to resort to commercial sources of financing that increase their debt burden.

“Furthermore, all of this will limit their capacity to implement the post-2015 development agenda,” the UN body stated.

Speaking at a high-level meeting that preceded the official opening of the CARICOM meeting, Bárcena suggested that CARICOM reach an agreement with the Caribbean Development Bank (CDB), the World Bank and the IMF to achieve a gradual write-off of total multilateral external public debt, since those funds were earmarked to finance recovery measures after the impact of natural disasters between 1990 and 2014.

In return, ECLAC said, the beneficiary countries should make annual payments to a Caribbean resilience fund that could be managed by the CDB and the main goals of which would be to address natural disasters, finance climate change adaptation and mitigation measurements, and boost social development.