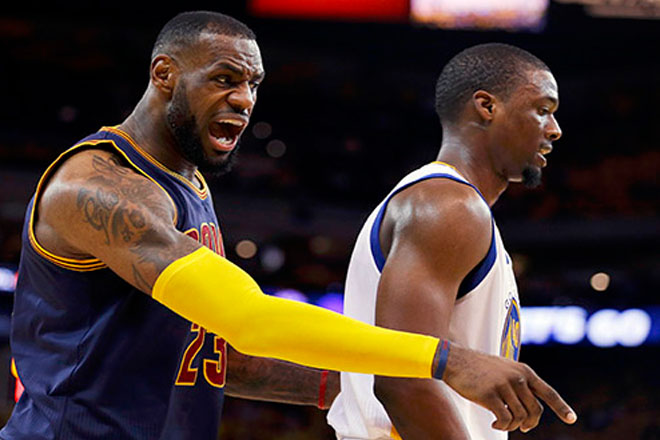 NBA Most Valuable Player Steph Curry scored 26 points and passed out eight assists while Klay Thompson added 21 points for the Warriors, who trailed most of the night but rallied late and dominated over-time after finishing deadlocked at 98-98 after regulation.

The first NBA Finals opener since 2001 to reach over-time was decided when Cleveland started with 0-for-9 shooting and made three turnovers while Curry, the NBA’s most accurate free throw shooter, hit four from the line and Harrison Barnes added a 3-pointer to open the extra frame.

“It was just a classic five minutes that we needed to get that win,” Curry said.

Cleveland superstar LeBron James scored 44 points, his best-ever showing in an NBA Finals game, while Irving added 23 points before the star guard limped off to the locker room after reinjuring his sore left knee, a grimace of pain on his face as he hobbled away, Australian reserve Matthew Dellavedova taking his place.

“Seeig him walk out of the locker room on crutches just now, that’s a tough blow for our team,” James said. “If Kyrie can’t go, Delly’s number is going to be called and everyone else has to pick each other up.”

Irving had battled through left knee tendinitis for a solid scoring night plus seven rebounds and six assists.

“You don’t like to see anyone get hurt but someone like Kyrie, it’s disheartening,” Cleveland’s J.R. Smith said.

The Warriors, who improved to 47-3 at home this season in regular-season and playoff games, will host game two Sunday before the series shifts to Cleveland.

Golden State seeks its first title in 40 years while the Cavaliers are trying to bring the city of Cleveland its first champion in any major team sport since the NFL’s 1964 Browns.

“He was fantastic,” Warriors coach Steve Kerr said. “Andre is one of the smartest defenders I’ve ever seen. It’s funny to say when a guy gets 44 points that the defender did a really good job, but I thought Andre did extremely well, made LeBron take some tough shots.”

James, who became the first player since 1966 to appear in his fifth consecutive NBA Finals, went 18-of-38 from the floor and 6-of-10 from the free throw line.

“We had five guys guarding him all night,” Curry said. “We just had to stick with the game plan and trust in our guys.”