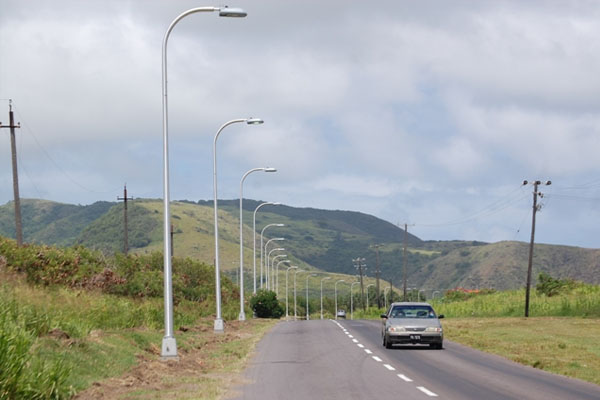 Basseterre, St. Kitts (CUOPM) – As the Federation of St. Kitts and Nevis continues the march towards a green economy, the President of the Caribbean Development Bank (CDB), Dr. Warren Smith, has made a strong appeal for Regional countries to give urgent and priority attention to the role of energy in improving economic performance.

St. Kitts and Nevis’ Prime Minister the Rt. Hon. Dr. Denzil L. Douglas is attending the 44th Annual Meeting of the Caribbean Development Bank (CDB) and Dr. Smith’s appeal comes as St. Kitts and Nevis with the assistance of the Government of the Republic of China (Taiwan) have cooperated in several projects.

These include the erection of nearly 150 solar street lights on the island’s main road between Sandy Point and St. Paul’s, the lighting of the Robert Llewellyn Bradshaw Memorial Park in St. Paul’s and along the Kim Collins Highway and the stretch of road leading from the round-a-bout at the Eastern Caribbean Central Bank (ECCB) to the Sugar’s Complex.

A two-megawatt solar farm has been commissioned at the Robert L. Bradshaw International Airport and a Solar Panel Manufacturing Plant has opened on the C. A. Paul Southwell Industrial Park.

Government Headquarters in Basseterre, the nation’s capital has also been powered by solar panels and the next set of low-income homes are to be solar-powered.

The Federal Government through the assistance of the Sugar Industry Diversification Foundation (SIDF) subsidizes the cost of electricity to consumers on St. Kitts and SKELEC – the newly formed St. Kitts Electricity Corporation – has an initiative where the consumer benefits if he or she keeps consumption at a set unit.

In Nevis, the NRP-Administration of former Premier, the Hon. Joseph Parry, established a 2.2 megawatt Wind Farm at Maddens, Nevis and successfully completed the exploratory drilling for geothermal energy at three sites – Jessups, Spring Hill and Hamilton – in Nevis.

Local businesses and private homes in the federation have also installed solar and wind energy equipment and have been granted concessions.
Addressing colleagues, Governors and delegates from CDB member countries attending the 44th Annual Meeting of the of the Board of Governors of the Caribbean Development Bank (CDB) which opened in Georgetown, Guyana yesterday at the Guyana International Conference Centre, Dr. Smith spoke on the theme of “Unlocking opportunities for competitiveness and growth – the role of energy.”

He said there must be a frontal attack on energy costs and the generally poor state of the region’s electricity infrastructure, if the Caribbean’s competitiveness landscape is to be addressed.

Dr. Smith noted that Guyana, hosts of this year’s meeting, shared borders on the South American continent with Venezuela and Suriname which are CDB countries and Brazil which is expected to join shortly. The continent now has some of the world’s fastest growing economies and Dr. Smith pointed out that in recent times, Guyana was itself achieving consistently high growth rates and improvement in many of its key economic indicators.

He suggested that as the CDB’s borrowing member countries (BMCs) move to strengthen trade with South America, Guyana occupies a strategic position as a gateway to the continent.

The CDB president said if the aspirations of Caribbean people to end poverty in the region and to provide high quality jobs for young people are to be realised, and for a just and prosperous Caribbean is to be fulfilled, then industries must be equipped and facilitated to compete in South and North America.

“They must be equally prepared to take advantage of the opportunities being offered through the European Economic Partnership Agreement; the hopefully imminent Caribbean-Canada Trade Agreement; and the burgeoning markets of the middle and far eastern countries,” he said.

This year’s Annual Meeting of the CDB governors therefore represented an ideal setting to look at the nexus between competitiveness on the one hand, economic growth on the other, and the role that energy can play, he said.

Dr. Smith proposed three areas of specific focus that had to be addressed in the current economic context.

“First, Caribbean countries have a competitiveness problem; and it is at the root of our difficulty in achieving the high rates of economic growth which we need to be able to provide the standard of living to which our people aspire.

“Second, the high price of electricity is a major source of our region’s uncompetitiveness, and of our vulnerability to external shocks.

“Third, we can increase our energy independence substantially; reduce the cost of energy; and in the process, create a whole new industry based on a new paradigm,” he submitted.

The CDB president said high rates of economic growth have eluded the majority of CDB’s Borrowing Member Countries, for a long time.

“Our Region’s economic expansion of two per cent per annum over the past decade has been consistently below the global rate of 3.8 percent; lower than the four per cent average for other Small Islands Developing States (SIDS); and way below the average of six per cent for emerging and developing countries.”

Citing two surveys – The World Bank’s “Doing Business” Survey and the World Economic Forum’s Global Competitiveness Index, Dr Smith said the Caribbean’s ranking did not compare well with other countries in the area of competitiveness. For example, out of 189 countries surveyed for the Doing Business index, the average ranking for the Caribbean is 100.

The rankings, he said, confirm that CDB’s BMCs will have difficulty maintaining existing markets and penetrating new ones unless there is radical transformation in the way they do business.

Dr. Smith argued that the macro-economic impact of the high cost of imported fuel and the consequential high electricity price were reflected in deteriorating performance indicators in most BMCs.

“High levels of debt to GDP and depletion of foreign reserves are directly related to this dependence on imported oil. High electricity prices erode the competitiveness of the regional economies and, therefore, their ability to earn the required foreign exchange to pay for imports, including oil,” Dr. Smith added.

Regional countries must there reduce their dependency on imported fossil fuels. “Unless we can substantially reduce energy costs, we will not succeed in improving our competitiveness and reducing our vulnerability to external shocks,” he said.

The CDB president also argued that Trinidad and Tobago was not the only energy-rich country in the Caribbean.

“We now know that our other BMCs are definitely not energy poor. Guyana alone has enough renewable energy potential, mainly in the form of hydro-power to meet all of its electricity requirements for the foreseeable future; supply all of the needs of immediate neighbours, Grenada and Trinidad and Tobago; and still have enough left over to sell to neighbouring Brazil. The situation is similar for Suriname,” he said.

In addition, Dominica, Grenada, Montserrat, St. Kitts and Nevis, St. Lucia, and St. Vincent and the Grenadines have great potential to generate their entire base-load electricity requirements from geo-thermal sources.

While their domestic markets are quite small, technological advances in the development of undersea transmission cables would allow these countries to exploit their relatively large geothermal reserves for export to neighbouring countries, Dr. Smith told the meeting.