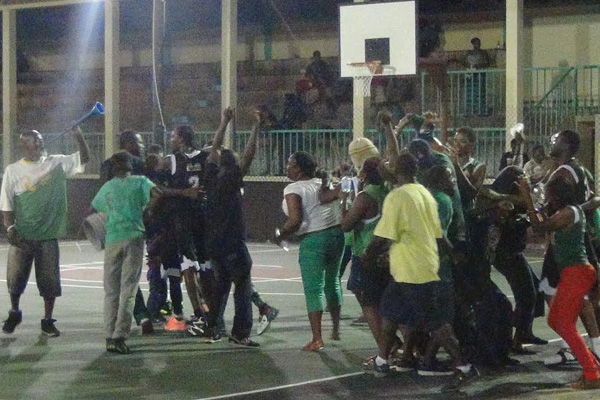 Challengers Exodus edge out CG Rebels in a Nail-Biter

It seemed as if the whole of Challengers village was on hand. They came with their drums and their whistles and their horns. Their intention was absolutely clear. They were going to blow down the walls of Jericho—make that the walls of the Grell Hull—Stevens Netball complex.

The second match in the best of five series between Exodus and CG Rebels, was played at the Grell Hull-Stevens Netball Complex on Saturday 1st November.

The home crowd was stunned into silence and seemed absolutely overwhelmed and intimidated by the massive SK presence.

The fact that the lights went off towards the end of the second quarter, did not help matters any.

The St.Kitts supporters screamed, shouted and pounded. One female fan even paused long enough in front of the NTV Sports camera to yell: ‘Are you tun off di light to wuk obeah..well it nar wuk!”

Eventually the lights came back and CG Rebels played some stunning ‘ball,’ hitting hoop after hoop and going well into the third quarter, they were leading by a comfortable 19 points margin.

Lo and behold, in the fourth quarter, the home team seemed to suffer from burn out and it appeared as if the Exodus team, regained momentum.

They brought it down to an eight points lead with just about two minutes on the clock.

The home fans waited with baited breaths hoping that Exodus would miss at the free throw line……but no such luck.

Exodus not only equalized, but went ahead with one goal, which they held on to for dear life until the final whistle went.

Minister of Sports in the Federal cabinet, the Hon. Glenn Phillip, stated that CG Rebels played well but due to their lack of experience did not know how to close out the game.

“They seemed to have forgotten how they were playing to get a 19 points lead in the first place and changed their style of play and then lost the game,” he said.

The Exodus supporters are vowing however that there will not be need for a game four.