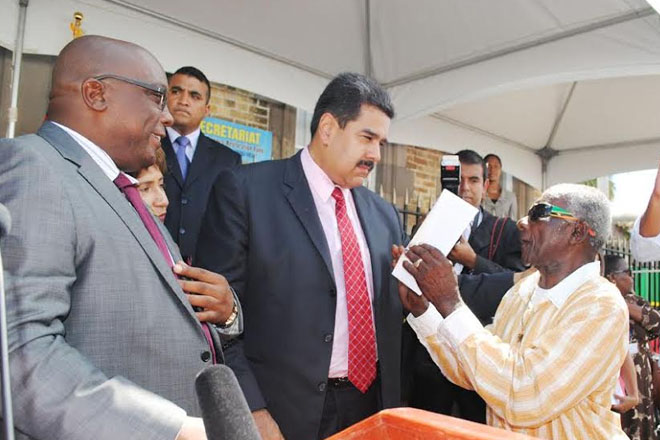 Basseterre, St. Kitts — His love for working on the farms as a young boy digging up potatoes inadvertently earned him the nickname ‘Chemical’.

Mr Samuel Wilson was born in 1935 in Lodge. As a young boy he used to go to the farms where older people were digging up potatoes but leaving some in the ground so they could sprout for the next season. He would go to dig up the potatoes left behind.

“I was a small boy then at that time, so I am digging up the potato and man was driving an old time tractor and he was throwing dung to fertilise the ground,” remembered Mr Wilson. “So I go on digging the potato, the tractor coming up to throw the dung in the ground.

“So me no study the tractor coming down, me I was interested in throwing the potato in my bag. So the tractor was coming and I was just stooping down and they shout, ‘Boy, chemical gonna knock you down’. That is how I got the name Chemical.”

He still lives in same area which is today referred to as the Lodge Project and according to him he went to the village school where the fee was three pence.

“The school where I get, let me explain to you,” said Mr Wilson who was in the company of his daughter Ms Rebecca Wilson and granddaughter Ms Donice Stanley. “They used to pay three pence, the one you call ten cents. The primary school was in the village and a lady was teaching.

“They teach you using something like board and with marble and you pull them across and you count 1, 2, 3, 4 until you reach down 20 and so on, and we had slates. But I didn’t get me long in schooling.”

Having dropped out of school, Chemical Wilson started working at the Ottley Estate in 1949 at the age of 14. For one truck load of cane, he would be paid one shilling. He still has some of those coins, which he called King George money.

“I used carry it up on my head up on steep hill side,” recalled Mr Wilson. “They had cane on the hill side and on level land but they would make you work on the hill side. I did not use to check how much I would earn at the end of the month, me no study that, me I get my two shillings (King George money) or three shillings me go where I am going.

“I would go in the shop and buy bread, big bread and we had cola in a black bottle. I go to the shop, they had red herring and they cut a big piece of bread and they give it to you, or salt fish. Old people them would be paid five shillings and after work they would drink rum. I used to work under them.”

Working conditions were very harsh as they worked under hot sun, or under rain. To cut cane they did not use machetes as was the case in later years. They used a short form which was called ‘the bill’ that was very heavy. He still has one of them which he shows his visitors.

When he reached the age 62, he was paid a lump sum pension of $700, but he was allowed to continue working. He observed: “When they closed the sugar industry in 2005, I closed with it.”

There were two pay-outs made to former workers. In the first payment he was told that he would get $7,000 but when he went to the Cayon Police Station, to receive his cheque, he was told there was nothing for him.

“I said alright, I turn home,” said Mr Wilson. “Me I did not make any farce because I was a PAM man and at that time they were wearing red shirts and I was wearing a yellow shirt. They paid twice and the second time my granddaughter Pinkie contacted the Labour Commissioner office to look after my welfare because I was sick in the foot and they had to put me in a car to carry me to the doctor.”

His boss called him and he had an envelope which he wanted to give to Mr Wilson. He however told his boss to read what was in it and he was told that he would be paid $5,000. He still has that letter in his possession. When he went to the police station at Cayon to collect the $5,000, they gave him only $1,500. He took it and started working for himself planting and growing ground provisions which he still does to this day.

When Prime Minister the Hon Dr Timothy Harris announced that he had sourced EC$16 million from Venezuela to make gratuitous payments to the former sugar workers, Chemical Wilson followed instructions issued by the Sugar Workers Restoration Fund (SWRF) Secretariat, and filled out the forms.

He received his gratuitous cheque at a public function outside the SWRF offices on Wednesday September 23rd, from the President of the Bolivarian Republic of Venezuela, His Excellency Nicolás Maduro in the presence of the Federation’s Prime Minister the Hon Dr Timothy Harris. He termed it an appeasement and closure of a bad era.

“I will say I feel wonderful,” said his daughter Ms Rebecca Wilson. “I am proud of that because at least Prime Minister Harris ensured that the sugar workers who worked very hard and then for them not to get anything would be compensated.

“Lord, I am happy to see that the Prime Minister went out to ask for help and the Venezuela government granted that help to assist sugar workers. Their president came in to make sure former sugar workers got the money. My father was the hero for it, as he collected his cheque from President Maduro. Thank you very much.”

Mr Wilson’s granddaughter Ms Donice Stanley, who was born in 1988, said that she was young but at least she knew that her grandfather worked in the sugar industry. She said: “I felt good when I learnt that the Prime Minister has sourced money to pay the sugar workers. He did a very good thing.”