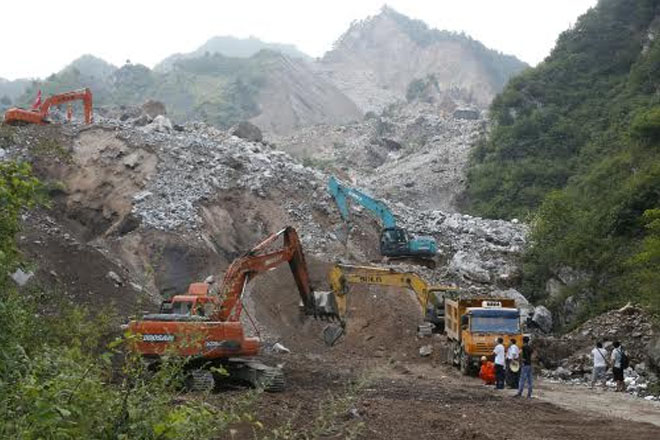 Beijing, China (AFP) — A lack of answers about vast explosions in the Chinese port of Tianjin Thursday reinforced questions about standards in the country, where campaigners say lives are sacrificed on a lack of respect for safety and poor implementation.

At least 50 people died and more than 700 were injured in the nighttime blasts that devastated one of China’s showpiece industrial landscapes, incinerating imported cars and scattering shipping containers in a key port in the world’s biggest trader in goods.

Officials could give no reason for the disaster at a storage facility for dangerous chemicals, saying only that “before the explosion, locals saw the fire and reported it”.

“Only after firefighters reached the scene, then there was an explosion,” Zhang Yong, the head of Binhai New District, told a the press conference.

The cause of the fire and explosion were still under investigation, Zhang said, declining to elaborate or provide any theories.

The panel of officials were peppered with questions about what chemicals were in the tanks that exploded, but refused to provide details, and the briefing ended abruptly with officials rushing off stage.

“Clearly there is no real culture of safety in the workplace in China,” said Geoffrey Crothall, spokesman for Hong Kong-based China Labour Bulletin, which promotes worker rights.

Only a year ago a massive explosion at a car parts factory in Kunshan, near Shanghai, left 146 workers dead, he pointed out.

“The usual statements were made about how shocking this is and should never be allowed to happen again, but of course just a year later the same thing happens,” he said.

“The problem is that there are a lot of rules and regulations about safety at work but they’re not enforced.”

There have been some improvements, at least statistically. Figures from the State Administration of Work Safety show that in the first six months of this year there were 139,000 industrial accidents and 26,000 deaths, decreasing by 7.5 per cent and 5.5 per cent, respectively, from the same period last year.

In the coal sector — where China is the world’s largest producer — there have been significant changes for the better. An accident in Chinese coal mines killed 931 people last year, a top work safety official said in March.

Crothall, who said the figure was between 6,000 and 7,000 a decade ago, attributed the improvement to consolidation of the industry as many small mines were shut down.

In 2013 a pipeline explosion at state-owned oil refiner Sinopec’s facility in the eastern port of Qingdao killed 62 people and injured 136, while a fire at a poultry processing plant in the northeastern province of Jilin killed 120 people.

Crothall said that a common characteristic of recent disasters is lax safety.

“In all of these cases it was clear there were safety violations, fire doors were locked, there was no fire escape in Jilin, there was no safety training for a lot of workers at the Kunshan factory,” he said.

Corruption is widespread in China, and campaigners say it enables bosses to evade regulations in pursuit of profit.

The Global Times tabloid, which has close ties to the ruling Communist Party, expressed surprise at the Tianjin disaster.

“We are now aware of how unsafe such dangerous goods really can be,” it said in an editorial on its website.

“In seemingly normal and busy modern areas or work zones, there may be explosives equivalent to dozens of tons of TNT nearby that could explode after a simple error and produce massive casualties.”

It called for transparency over the disaster — but an online database of Tianjin companies reportedly became unavailable after the blast.

Cheng Qian, a toxics expert at Greenpeace East Asia, said that China does have a specific regime for safety and environmental management of toxic chemicals, but enforcement is a challenge.

More stringent policies were required, she told AFP, adding: “In general what this incident reflects is that the implementation of even the existing chemicals policy is insufficient.”