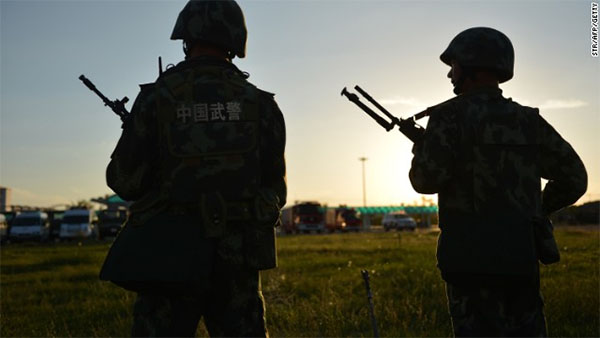 According to state-run regional media portal Tianshan, 50 people, including 40 “rioters,” were shot dead by police or killed by a series of explosions.

“Police forces reacted decisively,” said the report. The report didn’t specify how many were killed by police.

More than 50 civilians were injured during the blasts on Sunday evening, which police called a terrorist attack, according to Tianshan. The bombs hit two police stations, a shop and an open market frequented by ethnic minority Uyghurs.

On Monday, state media claimed that just two people were killed in the explosions. It is unclear why more details were only released several days later.

Local police refused to comment to CNN, saying the information surrounding the incident is “confidential.” The provincial government refused to provide more details.

The violence occurred just two days before prominent Uyghur professorIlham Tohti was found guilty of ‘”separatism” by a Chinese court and sentenced to life in prison.

Chinese authorities have stepped up security measures in Xinjiang following several recent attacks in the region, which has been the scene of ethnic strife between the indigenous Uyghurs, a mainly Turkic-speaking Muslim population, and Han Chinese.

The Chinese government has blamed recent violent incidents in Xinjiang on Uyghur separatists seeking to establish an independent state.

Waves of Han Chinese have flocked to the resource-rich region, fueling tensions with the Uyghurs, who regard themselves as culturally and ethnically closer the people of nations bordering western China, such as Kazakhstan, Mongolia, Pakistan and Afghanistan.

Xinjiang is now home to more than eight million Han Chinese, up from 220,000 in 1949, and 10 million Uyghurs. Unemployment among Uyghurs is high, and they complain of discrimination and harsh treatment by security forces.