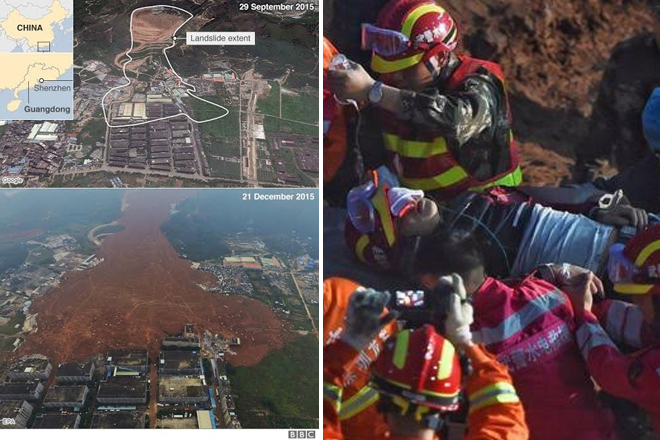 (BBC) A man buried in rubble for almost three days after a landslide hit an area of the south Chinese city of Shenzhen has been pulled out alive.

The landslide, which struck early on Sunday, engulfed more than 30 buildings in an industrial district.

At least four bodies have been recovered so far. More than 70 people are still missing.

The landslide happened when a huge man-made mound of earth and construction waste collapsed after heavy rains.

The government has opened an official investigation into the incident, after it emerged that authorities had previously issued warnings about the mound.

The 19-year-old survivor was found around 04:00 local time on Wednesday (20:00 GMT Tuesday), after being buried for 67 hours. He has been named as Tian Zeming, a migrant worker from Chongqing in south-western China.

Officials say he was found in an extremely weak condition in an excavated hole under the building’s roof. He was severely dehydrated and had a crushed leg. Rescuers took about two hours to safely pull him out.

During the rescue workers found a man’s body nearby that showed no signs of life.

Zhang Hu, a city deputy mayor, said four bodies had so far been found and he pledged to continue with the search operation.

“As long as there is a sliver of hope, we will never give up,” he said.

More than 5,000 people are involved in the rescue effort.

About 900 people were evacuated on Sunday as waves of soil and debris rolled across the district and sparked an explosion at a natural gas pipeline.

The number of missing has frequently been revised down, as people who were thought to be buried have been contacted or located by the authorities.

The ministry of land and resources said a mountain of earth and construction waste had piled up against a hill during the past two years.

State media say a district government report in January warned of a “catastrophe” at the dump, which it said was made up of 1 million cubic metres of waste.

Local resident Yi Jimin agreed the disaster was not an act of nature.

This is China’s fourth major disaster in a year