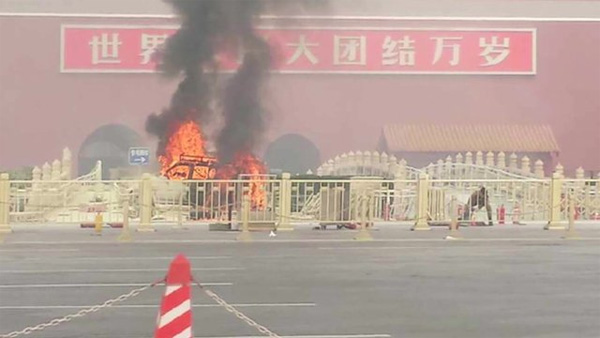 (BBC) Tiananmen Square was the scene of the 1989 pro-democracy protests which were ended by a military crackdown.

The site is generally kept under very tight security both because of its proximity to key political institutions and so that is does not serve as a hub for protesters and petitioners.

Incidents do occur, nonetheless. In 2011, a man set himself on fire at Tiananmen Square following what officials said was a legal dispute, close to the square’s portrait of Chairman Mao.

Two years before that, three people set themselves on fire in a car at a busy intersection near Tiananmen Square over what the authorities called personal grievances.

In 2000, several members of the banned Falun Gong spiritual movement were arrested for protesting at the square.

Fire extinguishers are kept at the site, and have been used when protesters set themselves on fire.

Monday’s incident took place at the north end of Tiananmen Square, near an entrance to the Forbidden City.

“A driver and two passengers were killed after a jeep crashed into a crowd of people and caught fire,” Xinhua news agency said.

Citing police and emergency officials, it said police officers were among those injured by the jeep, “which crashed into a guardrail of Jinshui Bridge on the moat of the Forbidden City before bursting into flames at 12:05 pm”.

One unnamed eyewitness told AFP news agency: “I saw a car turn a bend and suddenly it was driving on the pavement, it happened fast but looked like it knocked people over.”

“I heard an explosion and saw fire. The scene was very frightening,” he added. “There were paramilitary police who told people to get back into their cars and stop taking pictures.”

In a microblog post on its verified Sina Weibo account, the Beijing police said that “the injured people were all sent to a nearby hospital”.

“Police at the site immediately launched rescue efforts, and the fire was quickly extinguished… the situation is currently being investigated further,” the police added.

A subway station close to the square was temporarily closed at the request of police, Beijing transport authorities said. Police also closed the road near the crash.

News of the incident first appeared on social media from those who were at the scene, but it appeared that some pictures were being quickly removed.

A BBC team that went to the site to gather footage said that they were detained for around 20 minutes before being released.

AFP news agency said that two of its reporters were also held close to the square, with images deleted from their cameras.