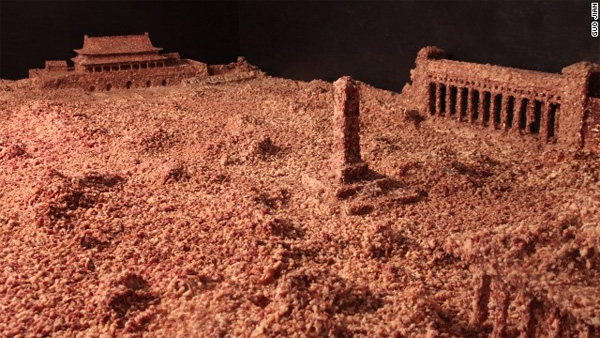 (CNN) — Prominent Australian-Chinese artist Guo Jian has been detained by Chinese authorities ahead of the 25th anniversary of the Tiananmen crackdown, according to friends.

His arrest came soon after the artist was profiled in a Financial Times article, which featured his latest installation — a diorama of Tiananmen Square covered in ground meat.

In the article, Guo was highly critical of the People’s Liberation Army’s (PLA) actions during the 1989 incident, in which he served in the late 1970s.

Guo was taken from his home in eastern Beijing on Sunday night, and contacted friends by text message to let them know that he had been arrested.

Artist Melanie Wang told the Sydney Morning Herald she called Guo after receiving a text message and he told her he’d been taken to a detention center. He said officers said he’d be released in 15 days.

Guo was an active participant in the 1989 demonstrations, which lasted weeks and culminated in PLA troops opening fire on a largely student crowd which had occupied the central Beijing landmark. Guo, it was revealed in the FT’s “Lunch with the FT” article, published on May 30, also took part in a hunger strike at the time of the student protests.

Another of Guo’s friends told CNN he phoned the artist Sunday night to talk about the FT article. After receiving no answer, the artist sent a message back, saying that he was “with police” and then a following SMS saying, “don’t call me.”

Following this, the friend received another message, this time in Chinese, saying he had gone to Tongzhou police station, near the Songzhuang art colony where he lives and works.

“I would characterize his (new artwork) as somewhat provocative so I assume that, plus the month we are in, and imminent anniversaries, might have had something to do with it,” the friend said. The person added that Guo was well aware of the risks that creating art of this nature might engender.

“The purpose of the installation was a commemoration of the Tiananmen massacre. He’s not naïve about this stuff, he’s fully aware of how things can go down.”

Prior to finishing the project, Guo asked the friend not to tell anyone about it, for fear that the authorities would stop him from working on it.

The Australian government released a statement Monday, offering its assistance to the artist, who holds an Australian passport.

“The Australian Embassy in Beijing has contacted Chinese authorities to seek further information on the reported detention of Mr Guo Jian and to underline our strong interest in the matter,” a spokesperson for the Department of Foreign Affairs and Trade said. “The Australian Government stands ready to extend all possible consular assistance to Mr Guo.”

In the FT article, Guo recalled the moment when troops opened fire on the demonstrators. “I didn’t believe it, even though I had been a soldier,” Guo is reported as saying.

“In the army I had never seen that sort of violence. Then I saw the tracers and people falling around me — they were just gone. I suddenly realised, shit, this was war.”

Authorities across the country have arrested a number of prominent dissidents and critics of the government ahead of the 25th anniversary of the massacre, which falls on June 4.

No official count has ever been released, but estimates of the dead in the incident range from hundreds to thousands, most of whom were killed by PLA soldiers.