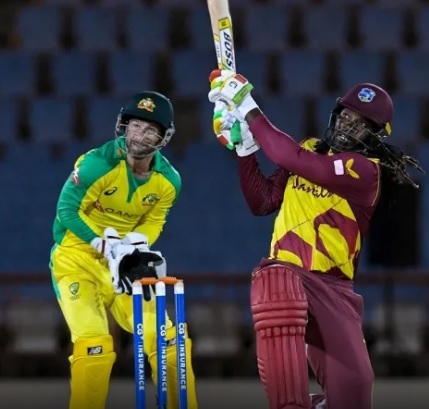 Chris Gayle put on a thunderous display, with his first T20I half-century since 2016, to secure a series victory for West Indies as he pummeled the Australia attack around St Lucia in what became a cakewalk of a chase. This, as West Indies engaged Australia in the third T-20 match of the ongoing series, on Monday night.

Having made 102 runs in nine innings since his recall earlier this year, Gayle launched seven sixes in an innings that took him past 14,000 T20 runs.

After he departed, stand-in captain Nicholas Pooran ensured there was no hiccup in the chase he closed it out with more than five overs to spare. It is the first time West Indies have won a bilateral series (or more than one match) against Australia in any format since 1995.

Australia had made three changes – two enforced by injury to Ben McDermott and Ashton Agar – and changed tact by opting to bat first when Aaron Finch again won the toss, but it was a laboured effort after some initial momentum in the power play.

West Indies were excellent with the ball despite Obed McCoy being able to bowl only one over.

Fabian Allen and Hayden Walsh Jr, who took his series tally to eight wickets, bowled their eight overs for 44. Allen also took a spectacular rebound catch in the deep to remove Finch in a display that further enhanced his fielding credentials.