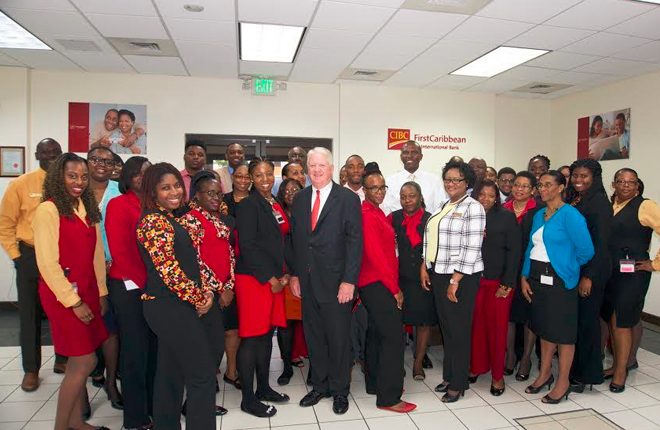 Tortola, British Virgin Islands, October 20, 2016 – The Chief Executive Officer of regional bank CIBC FirstCaribbean says the bank’s ability to grow and remain profitable hangs squarely on how it responds to the needs of its customers in the BVI and across the region.

Mr. Gary Brown, who took over leadership of the bank in January this year, was speaking to bank staff during a town hall meeting where he reiterated the bank’s mission to deliver the best banking service and support for its clients.

“Our mission to satisfy our customers and help them achieve what matters to them is dependent on our ability as individuals and as a team to perform our daily tasks with excellence and enthusiasm,” he said.

“Our existence and our ability to grow as a profitable business hinges on how well we are able to execute and deliver what we promise,” Mr. Brown added. “The bank has undergone quite a lot of changes in a relatively short period of time and having taken stock of where we are, we are addressing what needs to be done regionally and in each territory to meet our vision,” he said.

Mr. Brown acknowledged that as part of its internal audit in the BVI, there had been some necessary adjustments in the different business segments to improve efficiency and reliability. “As a team, we need to continually review where we need to adapt to create the best working systems and environment,” he said.

Following a question and answer session, Mr. Brown thanked the staff for their commitment to the bank and encouraged them to keep the lines of communication open between the front line and head office in order to foster effective team work.

Mr., Brown was in the British Virgin Islands from October 11-13, 2016 as part of his annual meetings with bank staff throughout the region.

During the two-day visit, he was accompanied by Mr. Gemel Sobers, Director, Corporate Investment Banking (Ag) and Mr. Rollrick Connell, Corporate Manager and they also met with some clients and other key political and industry leaders.

The tight schedule included a courtesy call on the Premier, Dr. The Honourable D. Orlando Smith.

During his first trip to the BVI in October 2015, Mr. Brown was introduced as the new CEO to take over from Mr. Rik Parkhill in January 2016. At that time, Mr. Brown was taken on a tour of the Cruise Ship Pier development project for which CIBC FirstCaribbean had approved a loan of $15 million to the BVI Ports Authority to complete the landside development.

Mr. Brown joined the bank’s head office in Barbados from his position as Managing Director and Global Head, Corporate Banking at CIBC in Toronto.