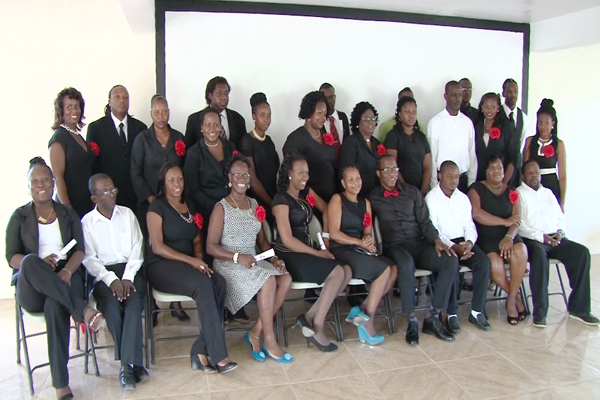 Basseterre, St. Kitts (SKNIS) — Efforts to increase the efficiency of the public service continued with a recent seven week training of civil servants.

A total of 28 persons received their awards for completing the Civil Service Training Programme; which was held in the last quarter of 2014.

“The Civil Service Training Programme of 2014 targeted the line staff of various ministries,” said. Torfrida Rochester, Chief Personnel Officer in the Human Resource Management Department “The government, in recognizing the sterling contributions made by this category of employees, sought to ensure that they are properly prepared and motivated to continue to give their best performance in all areas of their work.”

She further explained that such training is vital.

“Training is a very important mandate for the government, as the civil service requires a workforce that is knowledgeable, agile and able to respond to the increasing global competition with which we are faced,” she explained. “It is imperative of the government therefore, that all levels of the civil service, from Permanent Secretaries, Heads of Departments, right down to the line staff be equipped with skills and competences to better serve the general public and to mitigate against any challenges that may occur.”

Elvis Newton, Head of the Public Service reminded the graduates that the public service’s productivity depends on their performance.

Mr. Newton stated that “investing in the training and development of the human resources throughout the public sector is a pre-requisite, if government is to be prepared for the ever changing dynamics.

He reminded the graduates that it is “important that they engender professionalism that must stand out, especially in terms of how they deal with the general public.” He also encouraged them to “focus on further opportunities to pursue academic excellence” by enrolling in a number of programmes offered by the Clarence Fitzroy Bryant College (CFBC).