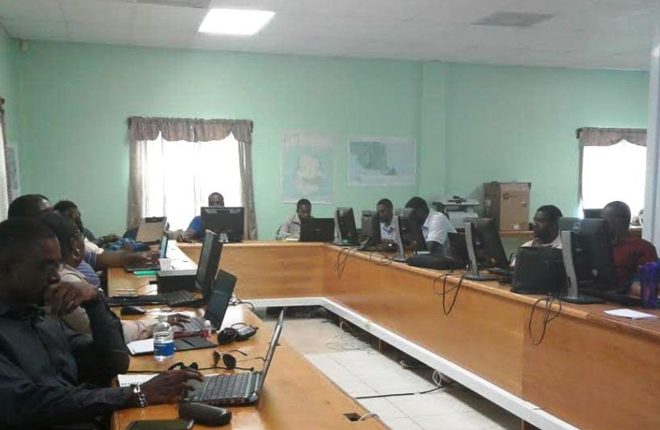 (SKNIS): The second week of training for stakeholders attending the eight day National Training Workshop in the Use of Climate Models for Decision Making has narrowed the focus on a number of tools designed to build the resilience of participants and the use of effective tools and methods to better advise decision makers when developing plans relating to climate change.

The tools that were developed by the Caribbean Weather Impacts Group (CARIWIG) include the Weather Generator (WG), the Tropical Storm Model/ Simple Model for the Advection of Storms and Hurricanes (SMASH), and the Caribbean Drought Assessment Tool (CARiDRO).

In an interview with the St. Kitts and Nevis Information Service (SKNIS), Cheryl Jeffers, Conservation Officer in the Department of Environment, gave an update on the training workshop which is being held at the National Emergency Management Agency (NEMA). She noted that participants are responding well to the training.

She gave a breakdown of the training for the next five days, to which participants will get a more in depth understanding of the tools and their uses.

“Stakeholders will be exposed to the the Caribbean Drought Assessment (CARiDRO) Tool from Monday, April 24 to Wednesday, April 26. This tool has been developed to assist the evaluation of meteorological and hydrological drought for the Caribbean and Central American regions, for both present day and future climate projections,” she said. “It simplifies standard but complex analyses and automatically generates a number of graphical outputs (e.g. time series plots and maps) and will support the agriculture and water resource sectors in their assessment and adaptation to drought hazard.”

Participants will be exposed to the weather generator from Wednesday, April 26 to Friday, April 28. Ms. Jeffers said that the tool is a new tropical storm model that provides spatial 15-minute scenarios of rainfall and wind speed over Caribbean islands under various scenarios of track, category, movement speed and historic notable storm.

“Managers may consider such scenarios as part of hazard management. Case study results suggest that hurricane speed, an under-reported metric, is actually of key importance, and that near-misses may be more hazardous than previously supposed,” said the conservation officer. “Exposure to these tools will allow decision makers to make better informed decisions to better understand the potential impacts of drought, tropical storms, and rainfall and temperature changes. When combined with other data and information, they can help to build a picture of potential impacts to key economic sectors in the country.”

Upon completion of the training, the participants will be divided into three groups. Ms. Jeffers said that the groups will be asked to identify three different practical events, each working with a different tool, after which they will present their findings in a case study before presenting it to policy makers. This exercise will take place over a six month period.