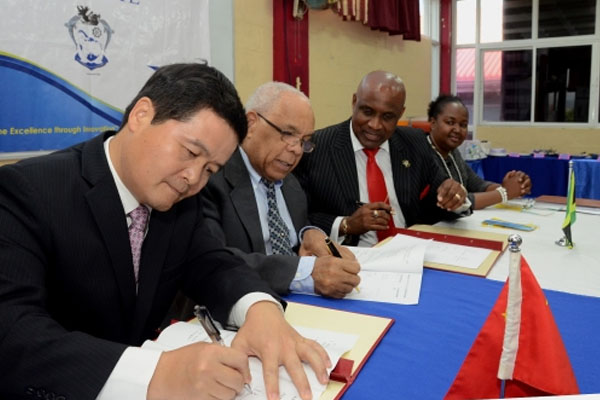 Kingston, Jamaica (JIS) — The curriculum for nearly 2,000 students enrolled at the Caribbean Maritime Institute (CMI) in Kingston is to be expanded, come September, with the introduction of a Chinese language training programme.

The initiative will see two lecturers from the Confucius Institute in China being seconded to the CMI to deliver instruction in Mandarin, the official standard dialect of the People’s Republic of China.

It is being facilitated under a Memorandum of Understanding (MoU), which was signed by the principal stakeholders during a brief ceremony at the Institute’s Palisadoes Park campus on Wednesday (July 30).

Delivering brief remarks, Davies said the MoU represents the continuation of an “expanded range” of agreements forged between Jamaica and China, particularly in relation to the maritime industry.

“This is of significance, and for that reason, on behalf of my Ministry and, indeed, on behalf of the Government of Jamaica, I am pleased to be associated with this. We look forward to building on (this and other) relationships,” said Davies.

Ambassador Dong, in his response, said the MoU’s signing is “evidence of the cordial relationship between the education sectors of our two countries”.

“It clearly shows that we have to explore all kinds of possibilities (between our countries); and as long as we can explore and find different ways to cooperate, I think we will be able to get things moving and done,” he stated.

For his part, Dr Pinnock, described the signing as an “opportune moment” to lay the platform that will further advance and consolidate Jamaica’s preparations for global developments, particularly in the maritime industry.

“We are at a very strategic point in our development as a nation, and the CMI is committed to the development of human resources… (consistent) with the highest (global) competency standards,” he assured.

She said the Education Ministry regards the teaching of Mandarin as an “historic moment” for education in Jamaica.

“The Ministry is, indeed, delighted to be a part of this partnership. We see it as very significant, and we are also very interested in playing our part to ensure that we are preparing our people…to be able to access the various opportunities in the emerging industries, and where we can see them creating employment for themselves as well as being employed, not only in Jamaica, but in other parts of the world,” McLean stated.