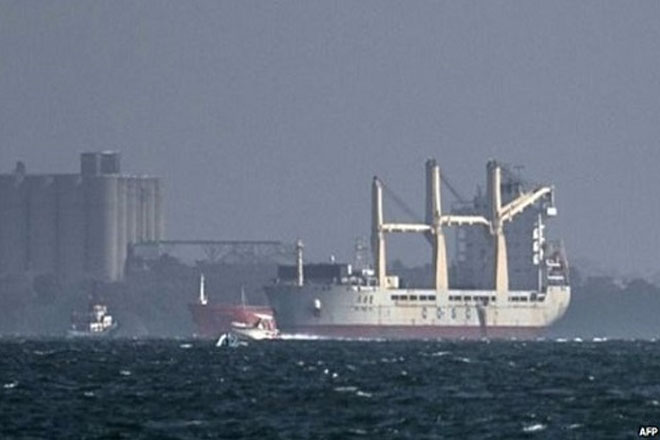 Colombia orders Chinese ship with weapons to sail for Cuba

Bogota, Colombia (AFP) — A court ordered a Cuba-bound Chinese ship loaded with undeclared weapons to sail for Havana on Tuesday, saying the arms could not be unloaded and might pose a safety threat.

Da Dan Xia, which has been held since last month, was loaded with undeclared military equipment including about 100 tonnes of gunpowder, 99 projectile bases and 3,000 artillery cartridge cases, according to Colombian authorities.

The freighter had been due to stop in the northern Colombian city of Barranquilla before ending its journey in Havana.

But when authorities found the ship’s documentation “conflicted with what was actually found” aboard the vessel, it was held in port.

But Beijing’s foreign ministry spokeswoman Hua Chunying maintained that the Da Dan Xia was operating within Chinese and international law.

The court ultimately ruled that because there was no way to unload the weapons and materiel, it ought to be shipped out.

It therefore ordered “to safeguard Cartagena residents and Colombians in general, the Chinese-flagged Da Dan Xian, to sail for Cuba,” the court statement said in part.

The ship’s captain Wu Hong will remain in Cartagena, on investigation for weapons trafficking, officials said.

A North Korean cargo ship, Chong Chon Gang, was found to be carrying Cuban weapons including surface-to-air missile systems and launchers when it was stopped in the Panama Canal in July 2013.