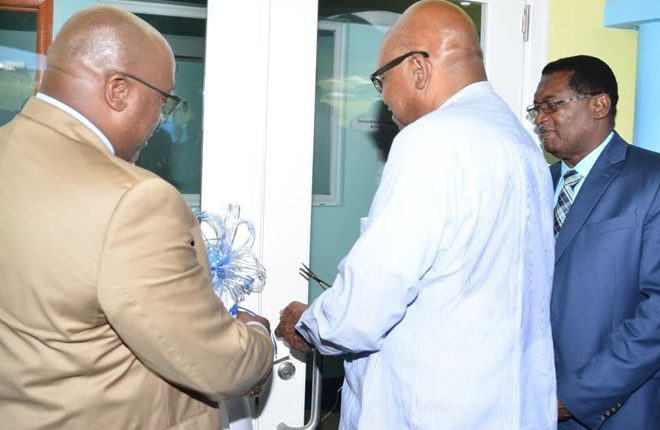 (SKNIS): Senator and Minister of State with Responsibility for Health, Honourable Wendy Phipps, has described the completion of the Mental Health Day Treatment Centre as a salvage mission at today’s (December 05) opening.

She noted that some of the funds that could have been obtained from the Basic Needs Trusts Fund (BNTF) had been lost and so the current administration had to be the major financer of the EC$1.3 million, one acre facility at Lime Kiln Commercial Development.

“This project was part of a previous BNTF cycle that had been in discussion and negotiation for at least three or four years, and by the time the government took office, we knew that although EC$800,000 would have been committed by the BNTF through the CDB [Caribbean Development Bank] to the project, if we did not complete this facility by the end of June of 2015, we would have lost everything,” Minister Phipps said.

“By the time the project reached to the point of the end of June 2015, we could have only accessed out of EC$800,000 committed by the BNTF, just EC$136,000 because obviously the project would have come to an end,” Minister Phipps said. “But bearing in mind the government would have articulated its concern and its commitment to excellence and investment in public health during the campaign phase and subsequent to the general election win of February 2015, we meant that we were going to see it through to completion. So the Ministry of Finance did its magic and that is why we are here today.”

Minister of State Phipps outlined the purpose of the centre.

“What we hope to do with this Mental Health Day Treatment Centre is to provide an avenue for rehabilitation for those persons we wish to see reintegrated into community life,” Minister Phipps said. “I think even for those who are more acute, who are housed at the hospital, that is our greatest wish for them as well. And it is for that reason why the standard operating procedures that would govern the management of this centre would take into consideration all of the various facets of processing and evaluation that patients would be required to go through in order to access their readiness for use by a centre of this kind, which if my memory is correct, is perhaps the first centre like this within the OECS.”

Minister Phipps noted that statistics from the Pan American Health Organisation (PAHO) have revealed that 34 territories make a concerted effort at working towards public health programming that would see reversal of anti-social behaviour and readjustment into community life.

“Out of the 34 countries, there are 16 countries that are presently within a PAHO programme for continued assessment and improvement as it relates to mental health and wellness and as of today St. Kitts and Nevis will now join the ranks of those countries that offer integrated services,” the Minister of State responsible for Health said.

Senator Phipps said Phase 2 of the Mental Health Day Treatment Centre project would include the construction of a tertiary facility serving as a hostel or halfway house environment for recovering mentally challenged individuals. She said the second phase would also include legislative reform which had already begun with draft mental health legislation.

Health professionals, both past and present who have contributed to the establishment of the centre, were also acknowledged.