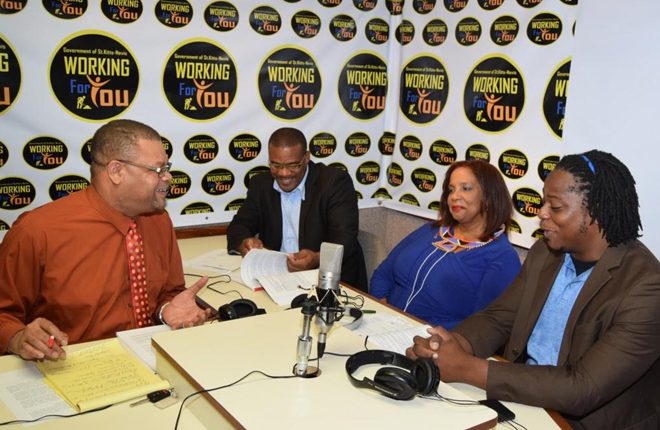 (SKNIS): Officials in the Ministry of Youth are pleased with the outcome of Tuesday’s (March 28) National Consultation on the Federal Youth Policy 2017-2022, which marked the completion of an extensive public engagement process that takes the policy one step closer to becoming law.

More than 200 stakeholders from the public and private sectors and civil society participated in the event and were primarily engaged in reviewing the draft discussion document and validating the content. Several suggestions were made to emphasize, change or include points from the various groups, which examined the seven priority areas listed as Economic Participation, Safety and Security Protection, Education and Life Long Learning, Health and Wellbeing, Youth as Agents of Democracy, Development and Nation Building, Youth and Sustainable Development, and Youth Development Work and Mainstreaming.

One day after the event, (Wednesday, March 29)Vernon Connor, Special Advisor to the Minister of Youth, appeared on the radio and television programme “Working for You” along with the Acting Director of the Department of Youth Empowerment, Pierre Liburd, and consultant/youth expert, Dwynette Eversley, and registered his pleasure.

“The objectives we established going into this symposium were met beyond our expectations and we are very elated for the response of the young people who we invited to this workshop and … for their active engagement in their discussions yesterday,” Mr. Connor stated, adding that the event received an ‘A’ rating.

After the event at the St. Kitts Marriott Resort, Ms. Eversley shared that two groups, made up primarily of young people, presented ideas on an education and communication strategy to allow the government to better communicate the details of the policy to promote buy in from the youth population so that authorities are held accountable, which is in keeping with government’s good governance agenda.

“We have some recommendations and that will be crafted into a Communications and Advocacy Strategy to make the policy more available,” Ms. Eversley said, noting that social media is a key part of the recommendations. “People can look at it, they can see oh this is what the government intends for me in the area of health, or in the area of entrepreneurship.”

The consultant added that a group of entrepreneurs that participated in the symposium made it quite clear of the type of supports they need from the government. “Those things are in the policy but we want to reshape [them] so that they are crystal clear; there is no ambiguity that the supports that are needed are evident,” she added.

Ms. Eversley thanked the staff of the departments responsible for youth affairs in St. Kitts and in Nevis and the many persons who volunteered to advance the policy to its current stage. After the draft document is updated it will be presented to the Deputy Prime Minister and Minister of Youth, Honourable Shawn Richards, to take to the Cabinet for review and approval before it is taken to Parliament. The Federal Youth Policy Initiative was supported by the United Nations Educational, Scientific, and Cultural Organization (UNESCO); and the Commonwealth. The United Nations Development Programme (UNDP) is also expected to provide assistance in bringing the finalization process to a close.