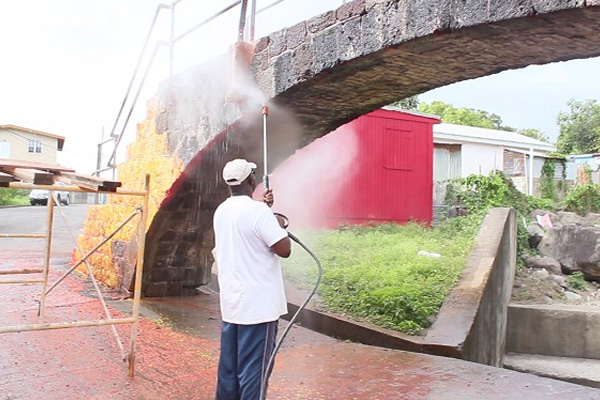 (ZIZ News) – Parliamentary Representative for Constituency Four and Tourism Minister, Hon. Lindsay Grant has called for a cleanup of a historic bridge in Old Road.

During an interview on Monday, Minister Grant said it is wrong to deface a piece of the country’s history.

“Something can’t be right today and wrong tomorrow. I mean, if it’s wrong it’s wrong. If it’s right it’s right. And so, whether it is red paint, yellow paint, it’s wrong and so, that’s the message I want to send to persons out there. It’s a matter that I have been very cognizant about. It’s a matter that I condemned during the course of the run up to the general election which was that persons had painted the “Old Stone” work in Old Road and other areas with paint and I felt that those areas were historic in nature, especially in Old Road which dates back to some 1623, not that wall in particular but in that area and so, I thought it was important for us to understand that we ought not to deface historical sites, even public sites and private property.”

Grant said he is leading by example by ensuring that the bridge is restored to its original state, free of political labelling. He also revealed plans to further renovate the bridge.

He said, “After the general elections, having won, I engaged some of my constituents and one individual, Clement Boone for Boone’s Construction said he had knowledge in the area and expertise in the area, said he wants to volunteer his services in terms of cleaning up the area so I said well, that would be wonderful. He has started the work, I’m sure you have seen it. It’s looking really nice. I suspect in the next couple of days, he would have completed the job and he, having completed the job in terms of taking off the paint, I want to go further now and do some restoration work on the walls to put it back in pristine condition and so, I want to thank Booney for the volunteer work he has done in terms of lifting the quality of the wall that we have.”

On Saturday, ZIZ visited Old Road and spoke with residents there, including Boone, who support the refurbishment.

“Over the years, I realise that the political parties been painting heritage sites.stone work to me is something I cherish as a builder and I think stone work should not be painted and so, when I saw it being done the first time it kinda hurt me a bit and I said next time I get a chance, if the other party wins I promised myself that I would take the paint off the bridge and so the party won and I decided to take the paint off the bridge because old road is the original town, the 1623 town.”