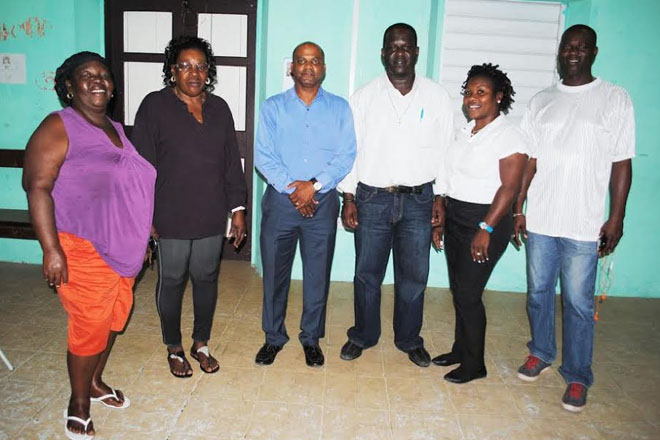 Constituents should be part of the process of governance and government, says Grant

Basseterre, St. Kitts — Area parliamentary representative for Constituency St. Christopher Four, the Hon Lindsay Grant, has embarked on a series of town hall meetings aimed at making his constituents a part of the process of governance and government.

The first town hall meeting was held at the Challengers Community Centre on the evening of Tuesday April 7, while the second one was held at the Old Road Methodist Church Hall on Wednesday April 8. Hon Grant is also the Federal Minister of Tourism, International Trade, Industry, and Commerce.

“I am really engaging all the communities in Constituency Number Four, and the reason being to ensure that the persons in the various areas are a part of the process of governance and the government,” said the Hon Lindsay Grant on Wednesday night at Old Road.

“Too often we hear that, the minister has done or has not done. I want to make sure that the people are a part of the system and so that when things are not being done, is not only the Minister, but it is also the people and so that is what we are here for today.”

At each of the town hall meeting a five-person committee was formed and was given the responsibility to co-opt people. According to Hon Grant, the five members would determine the matters that are to be done or need to be done in their respective communities and they would then filter the information to him to make sure that the things get done.

The five-person committee for Old Road is made up of Mr Cuthbert Caines, Ms Malisa Merritt, Ms Earklyn Kelly, Ms Olivia Hunkin, and Mr Leroy Matthew. Hon Grant told them that he would attend their first meeting, but they would be holding respective meetings in his absence, and only report to him.

“That is what I want to get out of this meeting: You bring your issues, you find out what the issues are of general nature and we see how best we are going to proceed to fix them,” advised the Hon Grant. “Some we can do in the short term, some can’t be done in short term, it can be done in a longer period, and we will take them accordingly.”

He however gave notice of what he expects from such meetings: “What I do not want this to be, I do not want it to be a talk-shop so that we come here we talk and nothing is done. I want that we talk and then what can be fixed, we fix and then when we get back at another time, at least I can say to you that these were the problems that you had, the five problems, three were fixed, the government can’t fix the other two now because the other two is a lot of money… what the issues are.”

Thanking the scores of persons who had turned out at the Old Road Methodist Church Hall for accepting to be part of the process, he told them he had come to listen to them and to know their concerns. They immediately took to the floor and person after person raised pertinent issues they felt had been neglected.

The first speaker, a lady raised the issue of the Old Road Library which is closed and who requested persons with old books to donate them to the library so that children could use them. She also requested that there be a person at the library to help the children.

The Hon Grant thanked the lady, saying that what she raised was very important, and he promised to look into the matter.

“When Ms (Constance) Mitchum (former area representative and minister under the previous PAM government) used to be around,” observed the second speaker, also a lady, “we used to get the elderly them and we go and we put out a hamper for them, even once a month or twice a month. I would like to see it go back to that stage because we have a lot of elderly people who really need them.”

In reply, the Hon Grant told the lady that she had raised an excellent idea because he admitted that he knew of a lot of elderly persons in the communities, who really could do with some help, pointing out that it could not be left entirely to the government to help them. Persons in the community to should take it upon themselves to identify such needy persons.

“I should also say that I have taken all my Constituency allowance and putting it in a fund to go back into the community for people who are in need in whatever way, whether it is the elderly or children who you know need… let it be uniforms, books… whatever it is,” announced Hon Grant. “I have taken my Constituency allowance and put it in a fund towards that every month.

More issues were raised including the importance of Old Road in the history of the country and the region, and the area parliamentary representative gave answers that were enthusiastically welcomed by those present as the answers gave an insight of what he would have achieved as their representative. These will be featured in a subsequent.